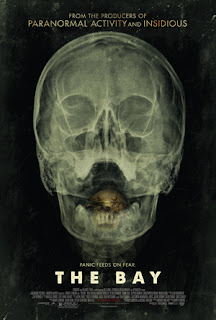 This found footage film tells the story of what happened in a small Maryland community on July 4,2009 when the town was decimated by waterborne parasites. The story is related to us by a journalist who is giving an interview for a website with much of the footage found in the aftermath of the incident.

How you react to the film will depend on whether you think about it or not. If you begin to pull the film apart then the film will collapse. If you just go with it then it will be a good thrill ride.

My initial reaction to the film was to be carried along by the events depicted in this eco-horror science fiction film. Sure some of it was too perfectly filmed, but for the most part I was just going along with each nightmare scenario as the people begin to blister, get sick and die horribly while the police, hospitals and EMS are taxed to the breaking point.

Yes I was grossed out by the excellent makeup and visual effects which make a very nasty turn of events very real.  Honestly I don't need to see some of the images in this film again. They are images too unpleasant to contemplate...as is much of the you are there footage of a system breaking down from overload on a holiday weekend.

I do need to report that the film has five or six genuine scares and another one or two cheap ass jolts. I have no idea how the other critics will rate the film but a good number of them really did leap out of their seats and scream. If they all don't like the film a  good number are lying since I was there and I heard them scream and jump.

If you see the film just take the film on it's terms, DO NOT THINK ABOUT IT and you'll find it to be one of the better scare machines of the year....

...on the other hand if you start to think about the film, if you think about the plot holes (which are larger than most similar films because this a larger incident) the film will shrink in stature. I'm not going to go into detail, I don't want to wreck the perilously fragile nature of the film before you see it, but be aware that what ever you do don't think of the larger picture (the problem with the film is largely that it's too many people in too large an area).

I would prefer to see the film as better than it is by not thinking about the possible errors. I will say that I am curious what the out takes and deleted scenes show. The world of the film is well done and I get the sense it is thought out, I just find that in thinking of the things that bother me that the errors lie in things we don't know, but because of the construction of the film as it stands may have been detailed but were simply cut out. (Anyone have Barry Levinson's email so I can ask him?)

I will add that I think on some level that while having made a good film that Barry Levinson is working in a genre that he doesn't fully understand hence it's not as completely satisfying as some of his other work. I suspect that he doesn't know you have to reveal more than you might in a normal film because we are working outside normal experience.

After thinking long and hard about the film, and pondering the conversations I had with three fellow writers I find  that I think the film is worth seeing with it's good bits out weighing the bad. I realized that I really like the film despite the short comings simply because I really want to see it again and I found that I'm talking it up to anyone who likes horror films. Ultimately it maybe flawed but god damn it has some creepy moments.
Posted by Steve Kopian at September 26, 2012