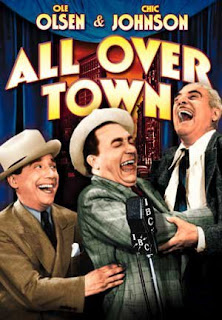 A simple telling of the plot would go something like this- Olsen and Johnson talk their way into putting on a show in a jinxed theater. The theater isn't really jinxed but is wanted by some one who'll do anything to get it. A murder occurs during a rehearsal after which Olsen and Johnson state that they will reveal who done it on a radio program, Unfortunately the murderer has other plans. Since any detailed explanation of the goings on would take as long as this hour long film, you'd better just find a copy and watch it to see for yourself.

Lets face it, Olsen and Johnson never really made a movie with anything that resembled a plot. Oh sure the movies have although lines but its a rare film that ever went there on a straight course. Olsen and Johnson loved to take the scenic route to "The End". Plots were never more than something to hang a never ending series of gags on. Here the plot takes frequent detours and stops for what is often inspired lunacy. In most of the duo's films you really don't care about the fits and starts since you're laughing too hard. Here the fits and starts cause an evenness to the affair with some bits going on too long and some bits not long enough (for example the bit with the radio program is rather too short, as if they came up with the idea, then ran out of time only to realize that they really had to do something with it). Its an odd mix that makes it not quite as good as the other films I've seen by the pair. Sure its funny but it doesn't hang together a well as it should (and the disappointment is only in comparison to other Olsen and Johnson films).

Is this film worth seeing. Yes its funny and it will make you laugh. But while I am a fan of the stars, and I know you will laugh, you probably won't come away as fans since this is a lesser film. (though you might want to try to get a second classic comedy to round out your nights viewing)
Posted by Steve Kopian at September 01, 2012