The problem with THE BULLET VANISHES (2012) 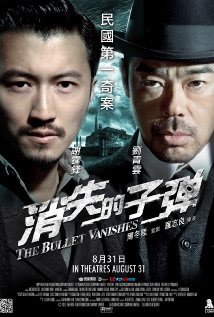 China Lion does those of  us in the US and elsewhere in the world a big service by releasing the nifty little mystery The Bullet Vanishes.

Set in 1920's China. Ching Wan Lau plays a police officer working in a prison. He acts a detective helping wrongly convicted prisoners find pardons. His work attracts the attention of the big wigs and he he sent to a town near a munitions factory in order to clean up the corruption. Almost from the get go he finds himself mixed up in a murder mystery involving a curse promising the death of everyone using a vanishing bullet. With the aid of two other police officers,one (Nicholas Tse) as clever as he is, Lau wades into the mystery making enemies as he goes.

I really like this film. It has a great sense of place and time. Its a film with style to burn. It has lots of great characters, the three police and their women are fantastic creations. Its a film with a couple of great action set pieces that are so much better than most sequences in American films (the ambush after the "kidnapping" is a particular highlight). I watched the majority of the film hoping that the film would do well enough as to inspire a sequel.

Seriously for the most part the film is really gangbusters...

...but (you knew there was a but) there are problems with the mystery itself. The problem doesn't become apparent until the final couple of minutes when you realize that they haven't covered everything...until they try to cover everything and you realize that there are problems with the story. I know that doesn't make sense, but it will if you see the film. There is this moment where you think everything is done. The story is effectively over...and then they continue the story. Had they run the end credits I could have walked out and been blissfully happy at finding a killer mystery, with some great characters I wanted to see in another film, but the film insists on explaining all of the loose ends and the film wobbles. Twists occur that seem out of left field and at the risk of saying too much one characters seems to do something out of character. It's not fatal but it makes a great film a really good one.

Don't get me wrong, I like the film a great deal, and I still hope for a sequel, but I wanted to walk out of the theater loving the film.

Any reservations aside, go see the film. While it is imperfect I do recommend it since the characters and action sequences carry the day.

Go see it while China Lion has it in theaters.
Posted by Steve Kopian at September 03, 2012