Two from VOD Sleepwalk with Me and First Position

The last night I was checking out what was on the IFC in Theaters VOD service and discovered they were running a couple of new releases I hadn’t had a chance to see yet First Position and Sleepwalk with Me. 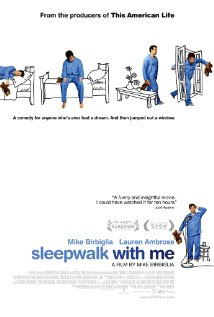 Sleep Walk With Me is Mike Birbiglia's film version of his much heralded theatrical monologue about his efforts to become a stand up comic, please his long time girlfriend and deal with the stress induced sleepwalking that eventually caused him to leap out a second floor window while asleep.

This much heralded film is for me one of the most over rated films of the year. It is certainly not a bad movie, but I am at a loss as to why we should care about Mike or his story. Don’t get me wrong Mike, or as he calls himself in the film Matt, is a nice guy, but he’s more a lovable loser than anything else. As he comments at one point in the film, the one thing that people like best about him is his girlfriend, which really isn’t a good sign. Also not a good sign is the gentle humor which is more smile inducing than laugh inducing (though for the record this lists as drama).

Admittedly all of the rave reviews the film has garnered since Sundance weighed heavily on my mind. As did the marketing which had Birbiglia and Ira Glass appearing at every screening of the movie for the entire opening weekend at the IFC Center here in New York and Carol Kane at a good number of the screenings the following weekend. You shouldn’t need personal appearances at every showing to put butts in seats. (on the other hand when last I checked IMDB had the film running around 6 out of 10 which is a much lower percentage than the critics would have you believe).

Ultimately this is an enjoyable but just okay film that probably would not have gotten any real notice were not B- had his show not been a minor theatrical event and if he didn’t have high profile friends. 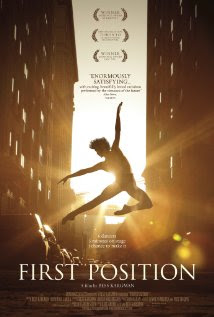 First Position was a film that I was supposed to review back in March in connection to its premiere at the new York International Children’s Film Festival. I never did because of a screw up concerning the screener for the film. I couldn’t manage to get to the festival screening and when it opened a short time later I managed to let everything else happening push it aside. Even a long run at the cinemas in Lincoln Center never got me into a screening. However sitting at home and being able to just watch the film at the push of a button did manage to get me to watch what I had been long neglecting.

This documentary follows several dancers, all under the age of 18 as they practice, dance, act like normal kids and mostly compete in competitions that will determine their futures as dancers. As one of the kids says after dancing before a set of judges, it’s only a minute on stage with no way to explain all the preparation that went into getting to that one brief moment in the spotlight.

Actually, pretty good, says the guy who isn’t a big classical dance fan. The film opens with some brief get to know the character sequences that are kind of by the books, but which rise above cliché thanks to some winning kids who manage to stand out from the pack. For me the film is an okay little film for the first half, and then it switches to something more once we see the kids going off the competition and the kids suddenly have something to win or lose.

This is a really good little film. I suspect that had I been a dance fan I would have been in absolute heaven with the film. As it is I had a good time and if you see this film I suspect that you’ll have a good time too.
Posted by Steve Kopian at September 07, 2012