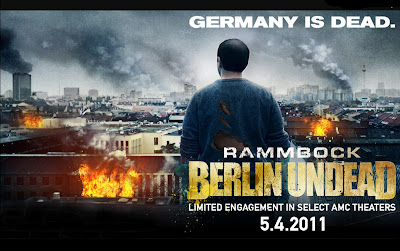 Good zombie film from Germany is one that will remain kind of on the fringe of most people’s radar due to its 60 minute running time.

To be honest I had bever heard of the film at all until I sat down to rewatch the film Yellowbrickroad on DVD. I had seen the film at the NYC Horror Festival and wanted to see how that film played on the small screen (not as well since TV strips it of the surround sound and all-encompassing nature of a theater experience- but I'll leave that for an upcoming post). On the front of the DVD was a trailer for this film which impressed the hell out of me and made me want to track Rammock down.

The film is available streaming on line via various sources, I watched it on Amazon’s streaming service. The first thing I noticed was the one hour running time. I kind of groaned when I saw that since I was sure that this meant there was something really wrong with the film, I mean it’s only an hour.

Well it’s only an hour because that s how long it takes to tell the story, which makes its running time perfect.

The film has Michael arriving in Berlin to surprise Gabi, his ex-girlfriend. He’s using the excuse of returning her keys as a means of trying to get back with her. Getting to her apartment he find workman fixing the heating. He tries to get them to say where she is, but they don’t say anything, actually one of them suddenly goes berserk, foaming at the mouth. Michael and Harper, a young worker, get the berserk man out into the hall way and they close the door behind him. The short version of the story is there is some virus tearing through the country turning infected people in to “zombies”.

This is a solid little film that builds some nice claustraphoic tension, people are trapped in their apartments and can’t get out because of the hordes in the streets. It’s a nice addition to the genre which is probably closer to the 28 Days Later films than some of other recent zombie films. The make-up effects are good, as is the gore and blood effects. The use of TV and radio broadcasts is also excellent since it gives us details we could never believably get otherwise.

If there is a flaw it’s Michael pining away for Gabi. Yes we understand you love her and want her safe but at the same time shut up. Yes I know that the one sided romance is what drives our characters but at the same time it doesn’t completely work and lessens an otherwise excellent little film.