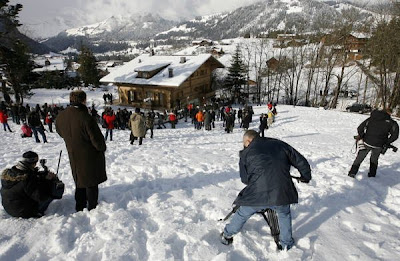 Marina Zenovich is a great interview subject. Listening to her talk about her follow up to 2008's Roman Polanski: Wanted and Desired I gained a ton of respect for her newest film. She met everyone head on and shot from the hip talking about how she fell into a feature film when Polanski was arrested on a California warrant. Her film was supposed to be a short film with an interview with Polanski on the status of the case in court, but things happened...

...unfortunately the film should have remained a short film because as it stands now this look at Polanski in Swiss custody is too long by half. Don't get me wrong, it's not a bad film, it was just too long for a  film where nothing happens for months.

Months. The film goes from a recap of the Polanski case with how the first film was going to be used as evidence to get the warrant rescinded. Then the Swiss told California that Polanski was was coming and arrested him. What followed was months of Polasnki under arrest... and Zenovich details it and the legal wrangling. The resulting film details Polanski's effort to finish editing his film The Ghost Writer, moves by his attorneys in the US and Europe,  how  Polanski's  "victim" Samantha Geimer wants it all to go away and how the press coverage was all consuming. For the most part we never see Polanski, we just have people talking about him.

It's an interesting story, but not at 90 minutes, especially when nothing happens for most of it other than talk..Couldn't this have been done in half the time?

I liked it but I can't understand why what is essentially an addendum to the early film  is getting feature status of it's own. I had hoped for some big revelation, like the first film, but this is more or less a short trying to pass itself off as something else. (I will give the film a pass in that there are several related matters to the story, such as the UBS scandal that the director tried to follow and include but was unable to do so since either  no one would talk to her or things were too complicated for inclusion)

Worth seeing, but if you know the case don't expect anything new here.
Posted by Steve Kopian at September 27, 2012