The Living Dead Three Films About The Power OF The Past 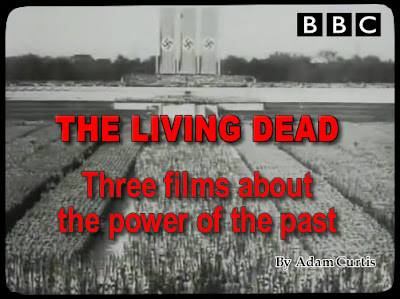 Part 1- On The Desperate Edge Of Now
Story of how the official story of the Second World War was created with the good Allies and the bad Nazi's and how it complicated with what most foot soldiers experienced. It's the story of how the official story caused millions of Germans to try and forget their past and how without a strong central force to keep it in place (the cold war) the old memories caused flare ups and violence in later years (Bader Meinhof and the sectarian violence is the Balkans)

Part 2 You Have Used Me As A Fish Long Enough
Is on how the discovery that electrical stimulation of the mind could trigger memories and the thought by some psychologists that we could fix peoples memories to make them be happier and more productive had ramifications in the cold war with efforts brain wash people on either side of the communist anti communist battle. The image of the brain as computer that you could pull apart and reprogram at will- that you can airbrush someones thoughts. The problem is that they could wipe but not replace

Part 3:The Attic
How Margret Thatcher took Churchill’s use of a great and glorious England used to whip up the population during the second world war and used it to shape her view of England in 80’s only to have it go in directions she never expected or intended.

I was trained as a historian. I don’t get to use the skills I learned in college much, I do still have a deep love of history. Adam Curtis’s look at how we view our past, both personal and national is a real kick in the head. His view is that any attempt to control the past is going to cause no end of trouble is an intriguing one, especially in today’s world where politicians are using talk of a return to a mythic golden age as the reason we should elect them. Its a view that runs counter in many ways to what one does as a historian since what we are suppose to do is order the past.

The first of the three interrelated films shows how the Nazi’s construction of a glorious golden age set the country and the world into a death spiral. The film also is a stunning look at how the war as experienced by the soldiers is not the same war that is in the history books with the personal memory being very different than the larger memory of the people. (It’s also a damn fine look at the truth of there being no such thing as a good war). Being a “historian”, at least by training, I know that the battle between what we experience and what gets written down is vast (See Simon Shama’s Dead Certainties for a great look at the matter), but here Curtis takes it further showing how not only do we order the chaos of life, but we disregard the bits that don’t fit into the way we want to see things (the defendants at Nuremberg were not allowed to explain why they did what they did).  Curtis takes great pains to explain that even if we are there and experience some event, if what we experience runs counter to the official story there is going to be trouble (soldiers knowing the hell of war not being able to reconcile it with the good fight or Germans suddenly being told that they were evil.)

Curtis revisits this idea of controlling the past in the third film by examining how Margret Thatcher picked up Churhill’s idea of a glorious England that he used to inspire England during WW2, and which bankrupted the country doesn’t really work and leads to unintended consequences, particularly as other people, the Irish Republican Army and others, picked up the idea idea and strove for their own glorious past and started armed conflict. .

Curtis’s middle film on efforts to create a mind where we could control memory, pulling out unhappy memories seems to indicate that that the best way to be happy is not to remember. If we remove the past we are not bound by it. The finding is the result of CIA and KGB efforts to be able to program people and to retrieve all of their memories. Sadly what they found was that they could remove memories but not create them. Its a troubling film that kind of raises the question, are better off not knowing our history?

As individual films the series has two excellent parts (the first and second ones), and one just okay one. the third. The  problem is that most of the points that Curtis made in the first film are repeated only focused on Margret Thatcher. I was maybe ten minutes into the third film when I realized that there wasn't going to be anything new here other than the details.

On the other hand the first and second films are stunning pieces that kind of shake you to the core. What is real anyway? Your guess is as good as mine.  Is there any order to anything other than what we decide upon? Possibly not. It would seem that life is chaos and that our efforts to enforce an order on it are doomed to disaster.

Hip deep in all of the other Curtis films this week I'm still trying to work out what it all means, if anything. In a weird way I find that while on certain levels this is the weakest series that Curtis has produced, it's effects are possibly the most far reaching since it's forcing me to reevaluate everything I knew or thought I knew.

Definitely worth hunting down.
Posted by Steve Kopian at September 05, 2012