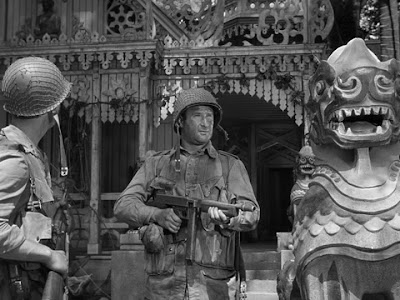 Objective Burma is one of the few World War 2 films that works on its own terms. Yes it’s very much set during the Second World War, but at the same time it transcends time. Its manages to keep it’s rah rah we’re fighting the good fight to a minimum and instead we are granted a gripping tale of men fighting to get home.

The tale has a band of Errol Flynn lead soldiers dropping behind enemy lines in order to take out a radar installation. All goes well they get into the jungle, hit the target and then get the hell out of dodge, heading for the pickup point at nearby landing strip. Unfortunately it’s at that point that things go south real fast. The air strip is not as they had hopped, and they are ambushed by the waiting Japanese soldiers. With no way for help to reach them they are forced to find another place to get picked up. Unfortunately the point is many miles away. What then transpires is a long running battle to safety.

At a time when most films were running about 90 minutes or less Objective Burma runs almost two and a half hours. The additional time is put to good use with the characters being fleshed out to more than just a stereotypical bunch. The extra time also allows for a ratcheting up of the tension. Think about it if you see enough movies you expect things to run a certain amount of time (say 90 minutes) before the end comes. Your body comes to expect that, but here the film continues on past the point we think it should end. We are in new territory which puts us in a new place psychologically.

One of the reasons the film works as well as it does is Errol Flynn gives one of his best performances as the leader of the men on the run. At a time when Flynn could be said to be phoning in some of his performances, he instead gives it his all and the result is an intensity lacking from some of films he was making at the same period. Flynn was very up and down during the war. He very much wanted to be off fighting the Axis, but health concerns sidelined him. However when he felt that what he was doing was making a difference he became focused and turned it on. Flynn felt the war films were important and gave them his all.

On the other hand the film was banned in the UK since the film is based on events that occurred during a British operation in the Pacific. (shades of the recent film U-571 which had Americans stealing an Enigma machine, something the British had done)

This is a great ripping yarn. Yes it’s old school Hollywood (It was filmed at a local arboretum) but you still believe what you’re seeing. This is the sort of great adventure film that is perfect for curling up with on the couch and losing yourself in. It’s a perfect popcorn film.

The fact that we are getting a chance to see the film on a big screen is a rare treat. It’s such a treat that I’m trying to balance my schedule so that I can get a ticket for when it screens Tuesday
Posted by Steve Kopian at September 30, 2012