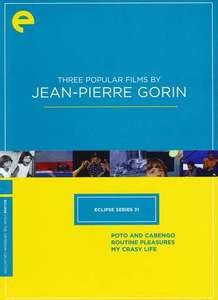 Criterion has put out  a box set of three documentaries by Jean Pierre Gorin, a French emigre to the United States.  The films take a decidedly off kilter look at American life as seen through his eyes. The films are worth seeing, but to my mind other than the last film, My Crassy Life, the films really aren't worth pursuing on their own.


Poto and Cabengo
This is the story of two sisters who grew up speaking a language all of their own-the title of the film coming from the girls names for each other.

The girls grew up as most twins do, living in close proximity to each other and rather isolated from the world. Since they are in closest contact with each other twins generally develop their own language which then falls away once they hit 2 or 3 when most kids really begin to be social. Here the girls didn’t have that much contact with the outside world so the language stuck  with them until well after they were 6 years old. That was about time the family was forced to go on welfare. Child Services thought something was wrong and put the kids in the hospital where it was discovered that they were not handicapped, just isolated twins. The pair then became media darlings for a brief while.

Jean Pierre Gorin’s film starts with the girls and then spins out looking at the family the American father, German born mother who speaks some English and her mother who speaks no English. Gorin wonders if the girls weren't so much speaking gibberish but an odd mix of languages rolled into one.

It's a good film and interesting as far as it goes but while it does shine a light into to a certain part of America, I don't think it adds up to much.

Routine Pleasures
Routine Pleasures is Gorin’s film that melds his encounters with the work of artist Manny Faber along with some train enthusiasts. It’s an agreeable 80 minutes or so, but I don’t much see the point. It’s a an interesting look at the train men and what they do but with a the hint of nostalgia. However, even being a train enthusiast myself, I was left asking the question, You’re telling me this because? I couldn't come up with a reason. Had I picked up the film on it’s own I probably would have been annoyed but as part of the Criterion Eclipse edition of Gorin’s films I didn't mind spending some time with these guys. As for the work of Faber it never really connected to me to the point it made any impression.

My Crassy Life
My Crassy Life is a film I need to see again. A mix of documentary and docudrama the film is actually the template, fully formed, of most of the low budget urban dramas that we see today. If I didn’t know the film was made in 1992 I would have sworn it was made in the last year or so.

The film is essentially the life of a Samoan street gang in Long Beach California. The film follows several people as they have run ins with the law, take care of business, hang out, and generally get by in life. There are numerous staged sequences and some documentary footage. It’s a slice of life, but with a rap song or two.

Rarely have I ever seen a film that seems so out of time from when it was made. There is nothing wrong with that, rather it’s just that unlike many films made at the same time, the film seems extremely connected to today.The film feels like it's a a kin to the numerous films made about gang bangers that studios such as Maverick turn out with regularity, except this film is extremely well made.

Stripped of the smart ass narration that the first two films in the set has this is a film that stands on it's own as a social document and good drama (even if the Samoan sequences seem oddly out of place). I really like this film a great deal and think that this film is worth picking up on it's own terms. The fact you get the other films with it as well is just an added bonus.
Posted by Steve Kopian at September 10, 2012