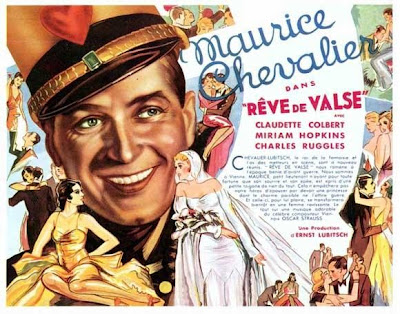 Third of the Lubitsch musicals again has Maurice Chavelier in the lead. This time he is the title character, a military man in love with musician Claudette Colbert. They meet when a friend, Charlie Ruggles, asks him to go along to see her play. The idea is that the friend doesn't want to do anything stupid and wreck his marriage. Ruggles needn't have worried since it doesn't take long before Chevalier and Colbert are in a torrid affair. Regretably things bcome complicated when Chevelier winks at the wrong time, just as visiting Princess Miriam Hopkins passes by. A huge scandal is ignited, which Chevalier thinks he's talked himself out of until he he is congratulated on his up coming wedding to the princess....

While nowhere near Love Parade, The Smiling Lieutenant has some rough charm to it. Certainly anything with Chevalier is worth seeing,  He manages to keep the film afloat even as the creaky plot grinds along. (the film is based on Nux The Prince Consort which was also turned into a operetta A Waltz Dream)

The problem for me is that the film is rather too artificial, yes its a Hollywood romance but at the same time the film manages to be a little too contrived even by those standards, especially the Princess, who is as stuck in the mud as you can get. For my money it would be a horror married to her.

On the other hand Colbert is a delight. She is an earthy woman who clearly has it all on the ball, and one can see how she could be a positive influence on Hopkins. (at the risk of being called foul, it's also clear that Chevalier ends up with the wrong woman)

Please understand that any reservations that I have are simply because I had such a good time with Love Parade which is also in the Criterion Eclipse box set of Lubitsch musicals, that anything else is a disappointment.(Certainly Monte Carlo which  followed Love Parade and preceeded this was a huge one, so much so I never wish to see it again) The Smiling Lieutenant is absolutely worth seeing.