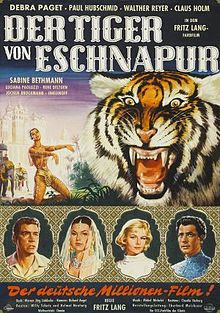 I’m a naysayer where this film is concerned. The first part of a two part film by Fritz Lang based upon a novel by his ex-wife Thea von Harou. It the second remake of the story which each time out of the box was made into two films (1921 as a silent and 1938 as a sound films)

The plot of the film goes as follows:
An Architect travels to India to build a temple. He saves a young woman from a tiger. Though the young man is promised to the Maharahaja, she and the arcitecht fall in love. The pair is imprisoned but escape into the desert and an uncertain future.

The story is then picked up in the sequel which takes the story to it's conclusion.

For me the film is little more than a pot boiler set in an exotic location. While the film was set in motion so that Lang could at last make his version of the story (Lang was to be the director of the original silent version but was pulled off the production) the film was riddled with broken promises and troubles that, I've heard, left Lang stinging. Things didn’t go the way Lang wanted and he was soured on filmmaking - Lang only made one more movie 1,000 Eyes of Dr Mabuse which on some level I guess he did as a kind of atonement or cleansing of the palate after the unhappiness of this film. (I will say that as much as Lang has altered and embellished the stories of the making of his films, to the extent that he blames others for things that didn’t work, this was a case where circumstances really were against him)

I’ve seen this film and its sequel once in their unedited form and they didn’t float my boat. As I said they are pot boilers and large scale soap operas set in an exotic location. I don't dislike the films but they are decidedly not my cup of tea. They are very much of the time in which they were made (I've seen bits of the 1938 version and that seems a bit more timeless than this does)

If you don’t have the three plus hours to see both films you could always catch the choppy condensation Journey to the Lost City which takes the two films and compresses the two films three hours twenty minutes to a scant hour and a half.

My question is why are they only running half the story? How can you end it on a cliffhanger? They should have run both parts because if you do see this at the festival you will want to see the sequel  The Indian Temple (yes I know I'm not big on the film but even I wanted to see how it all came out when I reached the end.).
Posted by Steve Kopian at September 29, 2012