Pandora's Box: A Fable From Science 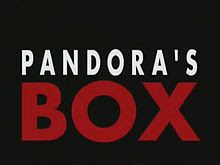 Adam Curtis week begins with a look at Curtis’s first series for the BBC. This six part series is, in it’s way, an introduction for many of his later films such as All Watched Over, Mayfair Set, The Trap and others.

Curtis’s films take a look at various ways how what we think is so has come to be. He takes us through the way we have view the world today was shaped and changed before showing us that what we think is so, really isn’t the case. It’s the fact that he shows us how we are operating under false a assumption that’s the troubling part since it shows how we are potentially heading toward disaster.

Part One is the Engineer’s Plot. It concerns how the Soviets thought they could control society so through scientific means. Scientists had taken human behavior and reduced it to statistics. The trouble is that the numbers really don’t reflect human behavior. It’s a mistake that western governments are now making because it makes quantifying results easier…even if they are wrong.

Part Two is To The Brink of Eternity concerns the Pentagon, game theory and all that it spawned

Part Three is League of Gentleman concerns the economic policies under Thatcher and how their plans to save to economy drove it deeper into trouble despite the fact that many economists were insisting things should work. It’s a market driven solution that that is playing out now as similar policies are being taken up by governments around the world.

Goodbye Mrs Ant is a look at DDT and Darwin. It’s a damning look at science and how we think it’s going to solve all out problems. It also examines how we view science fact of yesterday as being the fact of today even when it isn’t. For example the birds endangered by DDT are no longer in danger and are actually thriving.

Part Five’s Black Power is a sad look at how striving to do the right things for one’s country will get you into trouble and destroy the country when you make the wrong sort of enemies.

A For Atom is a damning look at how nuclear reactors may not be as safe as we thought since companies that make them are more interested in sales over safety.

Curtis’s strength is how he takes a subject we think we know, tells us everything about it and then inverts it so that we suddenly realize that what we thought was black is instead white. He then takes things further by showing us where continuing to see the world with those misconceptions will only lead to trouble. It’s a knack that is both disconcerting and enlightening since by doing it he constantly shows us that there is a way out of our quagmire if only we change tracks.

It is impossible to fully do Pandora’s Box justice in a few lines. Over the course of the six hour long episodes a great deal of material is covered and to truly do the film justice I’d have to do an entry for each part.

In this early work the various parts pretty much stand alone. There is no tying together of ideas in the way that he would do in later series. Here we see his idea that science is a good thing, but we can’t rely on it completely. Just because we see that it has given us the answers for some things, we have to be aware when it goes off the rails. For example in the final episode Curtis talks about how the drive for nuclear energy doesn’t take into account that the safety systems may not be up to the task, or in an earlier episode how DDT affected the eggs of falcons. This last point also brings Curtis to another one of his points which is that even as the thought processes change, that say DDT is killing falcons, we don’t see when things have changed again, in this case that the falcons are no longer endangered and are thriving.

The series as a whole is mixed. The discussion of the British monetary woes is a nice reflection of the nonsense that is currently going on in global economies and markets, but at the same time if you aren’t familiar with the events they are talking about you’re going to be adrift. The problem arises since the series was made for a UK audience which would know of what he spoke. The later episode about troubles in Ghana explains things more in detail so we’re no lost.

I think the best thing to say is that if you’ve never seen an Adam Curtis series start here. As I said at the start this is a film that’s an introduction for everything that followed. It will show you how Curtis structures his pieces. It will also show you many of the themes that Curtis will investigate again in later series.

See this and have your mind expanded.

(All of Curtis’s films can be found streaming on line. The films are really not available on DVD or home video. I’m told this is because of Curtis’s use of “found” footage which complicates matters. )
Posted by Steve Kopian at September 03, 2012