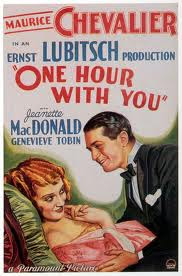 Last of the Lubitsch musicals is a light weight romp with Maurice Chevalier and Jeanette McDonald as a very much in love and lustmarried couple who stray when one of her old friends comes for lunch.

This breezy romp about a lusty couple who get sidetracked is nice little treat. While not quite on par with The Love Parade, the first of the Lubitsch musicals, the film is certainly a sister to the earlier film with the very adult very joyously lusty attitude toward sex.

The real joy of the film are the two leads. Chevalier is an absolute delight as the man sucked into “infidelity” by his wife’s friend. The fact that he is constantly battering down the fourth wall by confiding in as makes everything even more delightful. Jeanette MacDonald is equally wonderful as his wife who ends up being wooed by her friends husband.

What I love here are the songs which for once are not disposable. Here are songs that both work in context of the film and outside of it. I could imagine Chevalier singing about his quandary about what to do on a cabaret stage somewhere

This film is a real delight. It’s a 75 minute little confection that is as light as a feather. It’s the sort of thing that will have you smiling for it’s entire running time and then will slowly fade from you memory, only to spring to life each time you pass the film. I kept the DVD out on top of my TV while I was waiting to write this up and everytime I saw it I smiled mightily.

Between this and the films from the last two days the Lubtisch musical set from Eclipse Criterion is a must.