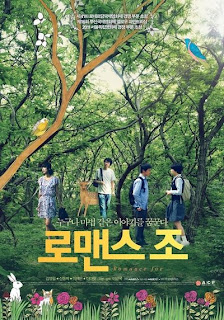 Sorry the reminder is late, it's my own fault. I was sent a screener for the film and only popped it in and watched it earlier today.

Romance Joe is a movie I missed earlier this year when it played New Directors New Films. Its a film I probably should have seen in a theater since it's structure requires a bit of concentration.

The film is a series of stories within stories that are all related in one way or another. The central thrust has a director/screenwriter getting stranded in a backwater motel in order to finish the screenplay for his latest film. He orders coffee which is delivered by a beautiful woman who ends up getting paid to spend the night in order to tell the writer/director the story of Romance Joe, a similarly employed man who once went to her home town.

Lee Kwang-kuk has made a beautiful film about people, stories and storytellers. It's a film full of small beautiful moments and very real characters. In many ways it's a charming little film. It's also a little hard to really explain because of the way it's structured...

And that's the problem with the film, the structure, which I think was made worse by seeing the film at home instead of in a theater. The problem is that structure of stories with in stories prevents the film from gaining traction since we're often moving to the next bit. For much of the first hour  the film bounced between stories every five or ten minutes and I was never fully engaged. I kept looking around my room at things that caught my eye. I kept thinking that I should have just stopped the film and went to the screening on Tuesday night.  Then things calmed down  in the second half and I was finally engaged enough to stop thinking about going to the screening.

Ultimately I liked the film. Is it a great film? No but it has greatness in it. There are some wonderful small moments and exchanges between characters that are worth your time.

Do I think you should see it? Yes, especially if you can get to the Tribeca Cinemas on Tuesday night. Seriously this is a prime example of a film that will play very differently if you can focus all your attention on it instead of just some of it.

The movie plays Tuesday at 7. Doors as always are at 630 and it's first come first served.

The next two films in the series are:

Home Sweet Home (aka Monster) which in some corners has been billed as a horror film, it's not. It has to do with a man hiding out in a hotel and his relationship with a younger woman amongst other things. I saw the film years ago and was very mixed on it. I'm going to try it again because the film has several big supporters and I'll report back before it's screening on September 25

Choked plays October 9 is about the destruction of a family thanks to the actions of it's matriarch. I've heard excellent things about this descent into hell and I'll be reporting on that as well.