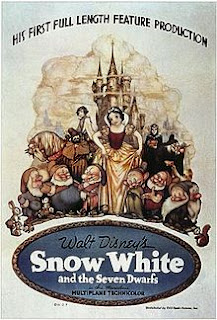 If you’ve never seen it on a big screen go see it...and even if you have you should see it at the New York Film Festival since they are going to show it in the correct aspect ratio.

The film is a visual masterpiece and it changed animation as we know it.

Yes there were other animated features, and yes there were other people taking animation seriously and as a work of art, but Disney’s film altered the way that the vast majority of people the world over saw the art form. Honestly and truly animation could be something more than silliness for 7 or 8 minutes

Sadly Disney’s work was so over powering that very few people in the US could ever hope to compete with him with the Fleischer Studio going down the tubes after Gulliver and Hoppity didn’t do as well as they had hoped.

A confession- outside of the art, this film bores me to death. I find it long and draggy and way too simplistic even by disney’s standards. I think that it’s a beautiful movie but that’s about it

This plays Saturday morning at 10 AM at the New York Film Festival and you owe it to yourself to go.
Posted by Steve Kopian at September 24, 2012