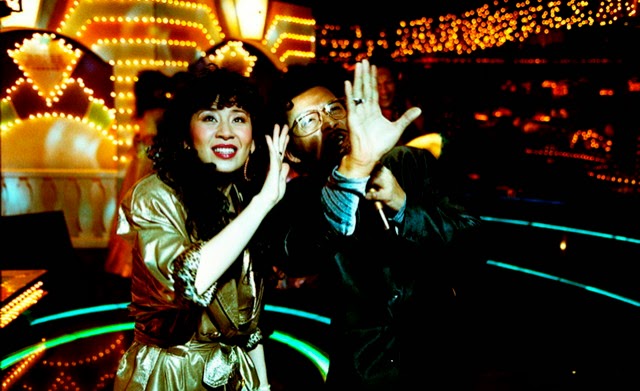 I'm cheating here- I saw this film ages ago and I thought I reviewed it either here at Unseen or at IMDB but apparently I didn't. I say that because I had hoped to steal that review for this years NYAFF.  With a back log of films I was left with the choice of tracking down my DVD or just winging the review. I'm winging the review.

Yea I know how can I write up a movie  that I haven't seen in years?

Easy, by talking about the things that I remember- and what I remember is laughing my ass off.  No matter what you say, this is a damn funny and absolutely charming comedy. I completely understand why this spawned two sequels.

The plot of the film has an aging prostitute, played to perfection by Sandra Ng, ending up trapped in a bank ATM area with a would be robber the very funny Eric Tsang. As they wait to be rescued/find away out Ng talks about her life story which mirrors the economic status of Hong Kong. Its a story filled with highs and lows.

If you've never seen this film you need to. This is a film that will make you laugh and smile and feel good. I say that because several people I know don't like comedies from Hong Kong or China because they find them to be overly silly with a feel that doesn't work for them. I know how they feel since I frequently find that some of the "great" comedies from China don't translate to Western sensibilities.  Golden Chicken crosses over and then some.

To be perfectly honest I have no idea why this film isn't better known. Why is that when so many other films from China have come and gone to great acclaim or at least word of mouth, Golden Chicken remains a kind of hidden gem. Its the sort of film that  most people I know don't know about, or even talk about, however when ever its mentioned anyone who's seen it will chime in at how good it is.