Rambling on about Death: The Final Journeys 1-6 and other death films 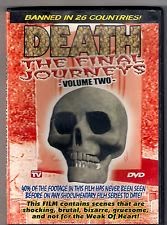 Gruesome series of DVDs of the Faces of Death variety, except all of this is real.

To be honest I'm not sure why I'm writing the films up,  they aren't really films in any real sense, they are more a collection of clips from other sources, news footage, police footage, car wreck films, autopsy instructional films, documentaries, other sources, all of which are sure to turn your stomach. The power of this series (which does get repetitive) is that the sequences seem to both be arranged randomly so you don't know whats coming next, and they go on for longer in other films of this kind, the sequences run long enough to let you know these are documents of real events.

No that's not correct I'm writing the DVDs up because nowadays this sort of thing is passe. One doesn't get a DVD of ghoulish scenes one simply goes on to You Tube and jumps around from nightmarish thing to nightmarish thing.  I'm not saying this to chastise anyone, I do get into dark moods and try to shock myself by going down rabbit holes, I also have a large collection of mondo type movies which have shocking stuff on them. Rather I''m troubled by how we now can have an endless supply of pain and misery. You could go for days on the Internet and never come up for air. I'm not too sure thats a good thing.

Back in the day when you would rent something like these DVDs or Faces of Death you'd get a movie, get some friends, brace yourself and take a 90 minute slide into hell- maybe- assuming the films weren't all made up. You'd watch the movie and then move on to the next thing, a Nightmare on Elm Street film or Dominque is Dead or something. You'd laugh off the grossness and move on.

Death The Final Journey's is at least 6 mind bending films which run about 6 and a half hours. For some unknown reason I watched all of the DVDs in one sitting one afternoon. yes I used the scan mode. There was a point in the first film where I knew I had had enough and decided just to scan through it all. Call me wuss, but there is only so much of this I can take and if I didn't go through the discs then I never would touch them again. I wanted to confront the darkness

You're probably wondering why would anyone choose to watch stuff like this?

I have no good answer. For me it's pure curiosity- I want to see whats out there- at the same time I  want to challenge myself- how much of this can I take. Why do I need to challenge myself in that way? No clue, but every time I do it it seems like a good idea at the time. I suspect that looking at stuff like this is related to watching horror films, its away of facing fear or death or something from a safe distance

Do I recommend these films? If  you want to go old school and want to run the risk of loosing your lunch I do. On the other hand you may not want to let your mother or your sainted aunt know you're watching stuff like this.
Posted by Steve Kopian at June 22, 2014