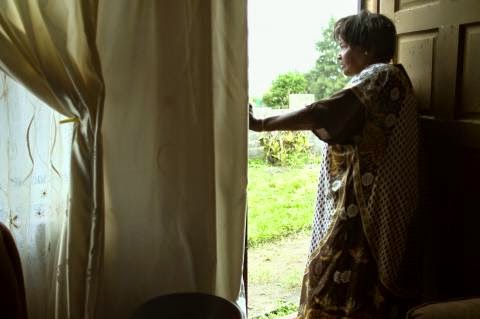 Khalo Matabane's film essay pondering what Nelson Mandela's legacy is a kick in the pants.

Taking the form of a letter from the director to Mandela the film explains how the highs of the end of apartheid became tempered by the realities of living in the new South Africa. As one young man says late in the film "we can be anything but we're still not equal" it s a chilling reminder that change is still happening and still needs to be helped along.

This is a really cool and important film. Its a film that does celebrate the changes but has the guts to ask the more important  question of what now? For me the  Hollywood happy ending that many,especially in the media, took Mandela to represent always haunted me since that allowed them to wrap things up neatly as if life is all skittles and beer which is obviously not the case. This film ponders the what now question and lets it rattle around in your head for a while.

Another vital and important film that will haunt you for days after seeing and make you ponder whats the real state of the world.

Plays June 13 and 14th. For Tickets and more information  go to the festival website
Posted by Steve Kopian at June 12, 2014