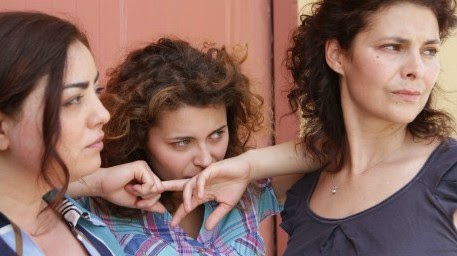 I'm not too sure what to say about Quiet Bliss. Its one of those really good films that you know should have been  great and the fact that it doesn't reach the lofty place it was aiming for some how makes it, very unfairly, seem less than it it is. I say this up front because its a really really good film that despite a few truly great moments was just going to good. Being good is of course no sin, however in this case its just bothersome

The film is the story of three generations of women who are forced to come together when the family business, a textile mill, closes down. The economic down turn has made continuing impossible so they move in together at the country home in order to make a go of it.

Told in longish takes and in shot choices that shy away from close ups the film feels like a kind of docudrama more than a drama. We are dropped into the lives of the characters and we are watching things transpire around us. The strength of the film is its sense of reality and the small moments. The one bit that comes to mind is the small moment where two characters say hello down a street,one asks the other if he wants to get a cup of coffee. Its a small little nothing moment that I shouldn't have latched on to but I did. I guess it was because there was a realness that was in it that was lost in some of the dramatic scenes (for example the sequences where a mother chastises her daughter for staying out late and going out again felt written  and not lived in)

When you see the movie, and you should, you'll notice I'm pulling bits from the early part of the film and not through it, and that's because after a certain point I stopped taking notes. Normally that's a sign of loving a film and getting lost in it. but here it was the result of knowing early on I wasn't going to have  a great deal to say. Iwas enjoying the film, but I knew if I took notes I'd just nit pick it, which wasn't going to be fair since it would make it seem like a bad film when in fact its a good one.