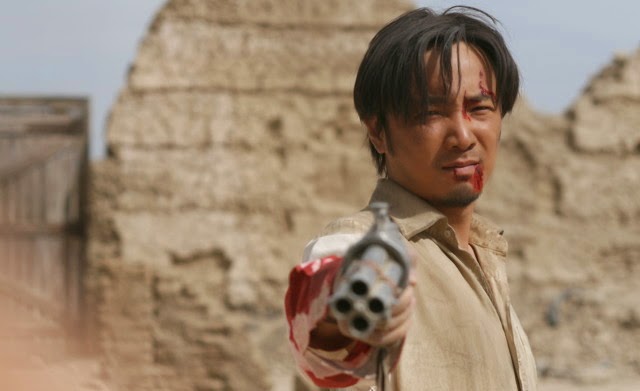 On the far side of the Gobi desert a high priced hotshot attorney from Beijing gets a man off for killing a cop. The man was part of falcon smuggling operation. The client tells the attorney he will be paid in ten days but attorney insists on taking his clients car as collateral instead. He takes the car and heads off unaware that there is something in the car and that he is heading into a situation that is going to be way over his head.

The story is that the Chinese government held up release for four years. Somehow the film escaped and was released last year and made a boatload of money. (if you go to the NYAFF screening and they explain it all, let me know the story)

Director Hao Ning has fashioned a dark action comedy where everyone is on the make and everyone has an angle.  Its a bunch of not wholly likable characters all trying to get an advantage on everyone else. Its the sort of film that makes you wince at the violence and has the laughter kind of catching in your throat.

In many ways this is probably the best film that Hao Ning has done.  For me its the one film that maintains its tone from start to finish and is consistently good all the way through. For example his Guns and Roses, which played NYAFF in 2012, suffered from wild tonal shifts including a final one to all black that made me want to play in traffic (and was a reason I've never watched it a second time)

I like the film a great deal and recommend it when it plays tomorrow night at the festival. If nothing else this is a great looking film that uses the widescreen frame to marvelous effect-so much so I wish I had seen this on the big screen. That said, if you go don't expect a light action comedy, this is something a tad darker.
Posted by Steve Kopian at June 30, 2014