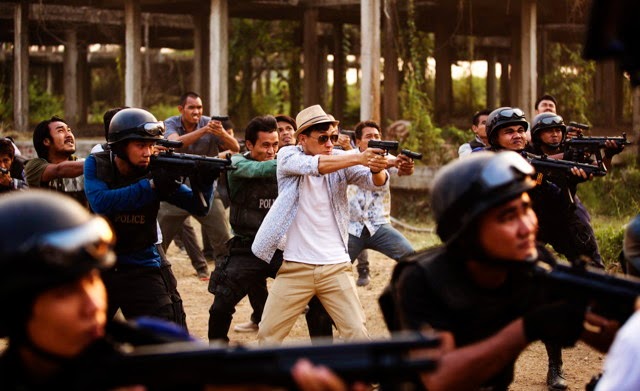 Benny Chan's WHITE STORM has Louis Koo, Sean Lau and Nick Cheung as three long time friends now cops on the trail of a drug lord known as Eight Headed Buddha.  When the first attempt at bringing Buddha down goes more and more wrong the friendship breaks. Years later the friends are brought back together under unexpected circumstances.

When I saw that Benny Chan had directed a film with Louis Koo, Sean Lau and Nick Cheung I was all over it. There was no thought, there was just a locking on of the target film and going for it and ordering a DVD from Hong Kong. I’m going to make it easy if the thought of these three stellar actors in a film by Benny Chan thrills you, skip the review and buy a ticket for when the film plays at the NYAFF.

If you want to know a little bit more read on-

The film concerns three childhood friends all now cops. One is an inspector, one is a mid-level officer and the other is in deep undercover in the criminal world who wants to come back to the surface. The plan is to go after one more bad guy, Eight Headed Buddha who hails out of Thailand, before pulling their undercover member out of the life. Unfortunately the trip to Thailand is totally screwed up and things go from bad to worse leaving the friendship broken and careers in tatters. Five years on the past comes calling and old sins come back to haunt everyone.

I’m not going to lie this film is a mess, a truly glorious mess, but still a mess. It’s a film that is all over the place in tone, style and genre. It’s a film with dynamic set pieces and long painfully exposition scenes. You will go from being giddy with delight to laughing at the film when a pop song kicks in during a fire fight. It’s a testosterone heavy melodrama for the first hour and a twisty turny throw back to the films of the late 80’s to the 90’s compete with riffs of classic Hong Kong films (The Killer anyone?).

When it works this film is amazing, when it doesn’t you’ll be snoring-or laughing Its a film that is both the best of the this years New York Asian Fulm Festival and among the dullest.

What was Benny Chan thinking? I wish I knew. And it’s his fault since he wrote this Frankenstein monster of a film. I don’t think he ever knew what he wanted to do with the film, I mean what is it- a realistic crime drama of much of the first half or a throwback to the Hong Kong action films of the early 90’s? He doesn’t know and the film suffers.

The worst problem is the pacing of the film. Much of the first hour is painfully slow and…well… dull. Yes we get to know the characters but not a hell of a lot happens. Yea there are a three action sequences, but until you get to the first act closer they aren’t as riveting as they should be. The remaining seventy five minutes move like the wind, actually they move almost too damn fast and have too many plot threads going through them. Things move so fast I’m not sure much of it makes sense. Of course it all ends in one hell of a shoot-out, of the sort that action fans will salivate over and is so wild they'll  forgive all the other short comings, but at the same time it took a long trek to get there.(Its the action you'll remember and is the reason this is ultimately a must see)

Don’t get me wrong I like the film, and I love bits of it, but I really wish it hung together more. I wish it didn’t swing all over the place. I wish the songs in the final shoot out didn’t make me roar with laughter. I also wish this wasn’t two and a quarter hours long. I appreciate that its telling what amounts to an epic story but the deadly slow first hour is not offset by the two quick last hour. While I do remember the high points of the shoot outs (especially the ones that end each of the stories halves) I wish there was more to love.

This is a good film, but it’s by no means great even if there are great performances and great moments.

Should you see it? Yes. Absolutely. If you like action or the stars this is a must see-even more so if you’re seeing it at NYAFF.

For tickets go to the festival website.
Posted by Steve Kopian at June 24, 2014