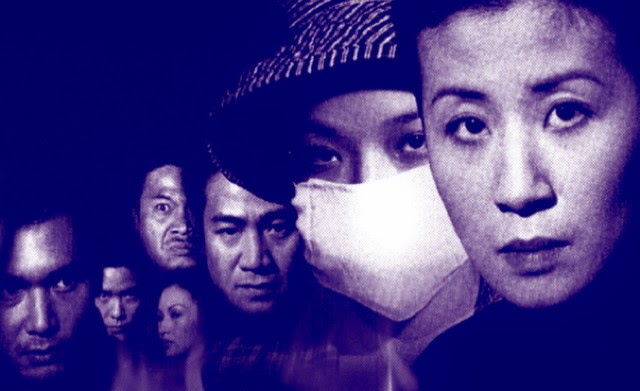 First off I did not bring my camera which means I do not have pictures-I promise tomorrow- three movies tomorrow so I'll have pictures.

The day began early with my running around the city- actually it began with a trip to Chinatown in order to run down a couple of films that the festival wasn't running.  I then went to a Five Guys Burgers for lunch and listened to the cheers for the World Cup game from across the street and down the block where they had scantily clad show girls and drummers. Oh yea- they were so loud that they could be heard over the AC and the Who who were blasting on the sound system.

I got up to the Walter Reade with over an hour before my only movie of the day. It was  was cool. I wandered into the lobby, picked up my program book, watched Ted Geoghegan running around trying to get everything ready. I then went outside and sat at one of the tables outside the theater and did some writing. A couple of minutes later Rufus and Goran popped out and went running around  before disappearing down the escalators. A few minutes later they reappeared with Sandra Ng between them.  They then disappeared through some glass doors.

I went back to writing...only to be interupted by Grady Hendrix who said hey and then asked "Did you see Sandra Ng?"

"Was she with Rufuas and Goran? They went that way"

I sat for a while more and then went in about 40 minutes before my screening.  Inside hold home week continued as I saw the ever lovely Lee who is a fixture at the festival.  I then got in line behind a couple of nice ladies and had a lovely conversation about the festival. I was amused when one of the ladies ran over to one of her friends, an older lady and said "You should have come to the movie last night, you would have loved it had lots of killing".

Dear I god I truly love NYAFF audiences- well except for some old biddie who wandered out of the theater program in hand- making a b-line for the garbage into which she tossed the program as if it was infectious material. Obviously she was the wrong audience for Golden Chicken

When the Q&A for the previous film ended I headed inside catching up with MrC and Jared from Bullets over Chinatown. We shot the breeze until the prize drawing.....

Amazingly I won a DVD of  JOURNEY OF THE DOOMED and old film that Grady had never heard of, however Jared had and said it was pretty good. As Grady was handing me the DVD someone from the peanut gallery screamed "Hey Steve you have to review it so we know what the film is". And I will.... I'll try to get a review up this week.

PORTLAND STREET BLUES is one of the spin off films from the Young and Dangerous series. I have not seen any of the films, but it really didn't matter, this is still a good film on its own terms (though if you have seen the other films this plays better since you know some of the characters-or so I'm told). It also contains one of my favorite lines of dialog from 2014 when a tramp says to Sandra Ng "I love the warm tubes of men"

The film follows lesbian crime boss Sister 13, played by Ng. The film tells her story from her teenage years, her relationship with her dad, her romances and her rise through the ranks. Its a film that shifts back and forward through time as we see how the past influenced the present.

I really like the film a great deal and now I'm going to have to track down the other films in the series so I can see this again and get all of the references.

After the film Grady apologized because the despite being promised that this was the original Hong Kong version by Warner Brothers, it was in fact the Malaysian one which removed the criminals win ending and added a couple of extra scenes that have no bearing on the film but which imply that Sister 13  was undercover police (in Malaysia crooks can't win). To be honest the removal of some material and the addition of the police scenes made the film a bit choppy in a couple of places.(Ng seemed horrified and embarrassed that it was the Malaysian version)

The Q&A with Sandra Ng was a great deal of fun. I hope to get video and pictures from Mr C or Jared shortly. I only scribbled a few notes because they were filming but she did say a couple of cool things.

She said that Triad films are out of favor in Hong Kong. No one dresses like they do in the movies since they now want to blend in. She said that when they were filming the Young and Dangerous films they never got permits but did pay protection.

She asked if we thought she was pretty a couple of times and got resounding rounds of applause each time.

She said that no film role has ever really been her. She said that she uses pieces of herself but mostly they are all made up.

She said that she does watch her films, largely because she's made so many that one of her films always seems to be on.

There's more and hopefully the video will reveal it.

After the Q&A Ms Ng gladly signed and posed for photographs  at the foot of the stage until pulled away by Grady so they could clear the theater. She then continued to sign and pose outside until her car arrived.  She is a truly classy,and very beautiful lady.

For now it's bed and a long day on Sunday- I'll be leaving the house at around 10 AM and getting in around 1AM. Keep reading because reviews and reports will be filtering in....
Posted by Steve Kopian at June 29, 2014