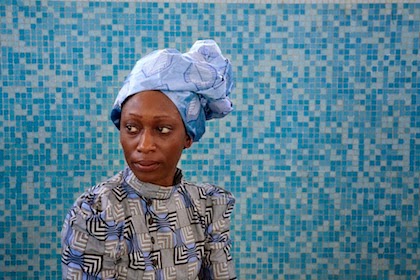 Stealing part of the synopsis from the Human Rights Watch website the film tells the story of Hafsat Abiola, daughter of human rights heroine Kudirat Abiola, and Nigeria's President-elect M.K.O. Abiola, who won a historic vote in 1993 that promised to end years of military dictatorship. Shortly after the election, M.K.O. Abiola's victory was annulled and he was arrested. While he was imprisoned, his wife Kudirat took over leadership of the pro-democracy movement. And when Kudirat was assassinated Hafsat took over as the face of the democracy movement.

This is a perfect marriage of social, national and family history. This is a film that works on a variety of levels. Its a documentary that is very real and very alive as Hafsat and her brothers  and sisters and her family spin out the the story of a family and a country in a way that is both informative and entertaining. Its the sort of thing you'll want to watch a second or third time simply because its telling you one hell of a story;  the sort that would be an edge of your seat serial on network TV.

This is a great film. And yes, I know I should be going on about how important the film is in getting the message out and all of that- but you know what if I can get your butt into the theater to see this film because you'll enjoy it on a movie level, you'll still get the message. If you like the film because it entertains you you may very well do something faster then if you walk out feeling obligated.

Go see this film. You have one shot on the 19th.  Trust me not only will you learn something you'll enjoy it as well.

For details on the screening and tickets check the festival website.
Posted by Steve Kopian at June 17, 2014