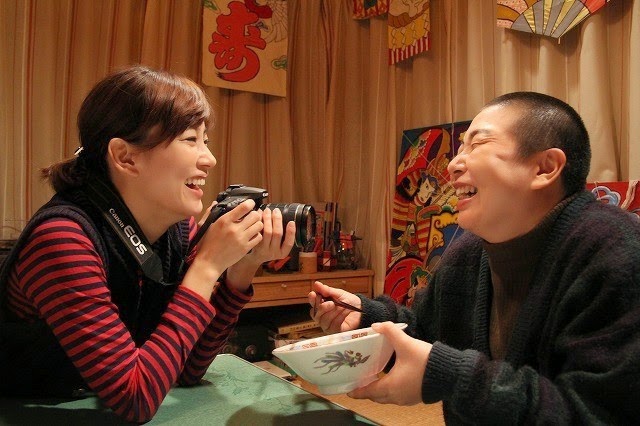 Just go see this movie and give yourself over to it.

No seriously, just go see Fuku-chan and just go with it and enjoy yourself.

I say this because when I was watching the film I fell deeply under its spell. Here was a story that spoke to me. It meant something to me. It seemed to mirror my life and the wonderfully crazy people I call my friends. It was film where I could feel each moment as if it were real and on target and pulled from my life. But there was a point where suddenly I disconnected from the film, there was a moment where I began to panic. I couldn’t allow myself to stay connected to the film- I had to break away lest the film turn rotten and betray what was happening. I couldn’t bear the thought of such a wonderful film falling apart and breaking my heart in the end.

I needn’t have worried. This film is a keeper. This is a film to share and pass on and enjoy for years and decades to come.

Simply put this is a great film and I love every damn frame of it.

The film follows thirty two year old Fuku-chan. He’s a sweet big guy that everyone loves. He goes through life hanging out with his friends and making kites. While his friends try to set him up with some nice girls he refuses for reasons he won’t go into. However things begin to change when a photographer enters his life. She was Fuku-chan’s first love and the source of Fuku’s reluctance with women.

What can I say? This film is wonderful. From its fart opening (trust me its actually charming) to its final fade out this is just great time with good people. Actually even with the exception of the crazy photographer this is a film that is full of real people. I know a great many of these characters. I see myself in any number of them. Rarely has any film gotten life so right-especially life on the so called fringe.

You’ll forgive me I can’t say more. Not because I can’t, more because I don’t want to ruin it for you- you need to go through this film and get that wonderful smile and warm and fuzzy feeling for yourself. I had no one to spoil it for me and I don’t want to spoiled it for you.

Go but tickets for this when it plays on July 3rd at the New York Asian Film Festival. And if you need more of a push know this is one of my favorite films of the year.

For  more information and tickets go here.
Posted by Steve Kopian at June 29, 2014