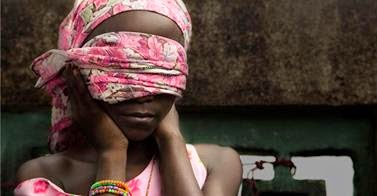 This is the story of Olivia Zinnah who was raped when she was seven. She was discovered in a hospital in the Liberian capital of Monrovia where she had been staying for two years because the damage to her was so bad that it created a fistula between her her vagina and colon. The film follows Olivia's life from her discovery in the hospital onward over the next three years as she is nursed back to health and the government and the doctors try to get justice for the little girl.

A darkly compelling film that is both incredibly sad and strangely hopeful Small Small Things is a tough film to watch. Its hard to to see the terrible things that happened to such a sweet and charming little girl. It's even harder to watch how justice isn't really done because many people refuse to believe that the girl was raped, going so far as to suggest that because Olivia never reported the assaults until she was two years at the hospital she liked it. And for me, who has a day job in the criminal justice system it's hard to watch because here in America the wheels of justice wouldn't skid all over the place as they do in Liberia.

This is one of those films that will have you talking to the screen in disbelief-I mean how can people actually behave like this? Well they can and they do and despite the strides of Liberia's president to fix the problem of women's rights (rape is the number one crime in the country) it all goes to shit.

My heart broke several times while I was watching the film.

And yet there is a weird hopefulness despite the tragedy. We do see people come together. We do see that with the right people around her a victim of something as terrible as this can begin to flower and become a little kid again. While the outcome is not happy, there is at least the seeds that perhaps something better can eventually come of the tragedy.

This is a powerful film. In it's way its an important film if nothing else it highlights a terrible state of affairs in a country that was once closely connected to the US. So I hesitate to say this but I really wish that director Jessica Vale had let someone else do the narration since here voice doesn't have the gravitas that the words she speak requires. Its not fatal since after a certain point the people in the story take over and the narration falls by the way side.

If you want to be moved I suggest that you see this film.

The film opens Friday at the Quad Cinema in New York for a limited run.