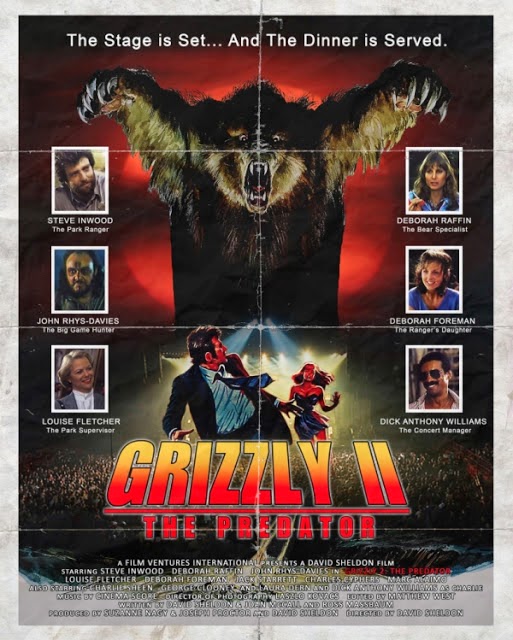 This feels almost unfair to judge a film by it's work-print. In other words, a very early version used during the editing process. But what if it's something so obscure, so incomplete and quite frankly something that probably wouldn't have been good regardless. No I'm not referring to that unfinished, fourth Sleepaway Camp sequel, this is much more sinister. A follow up to the 1976, Jaws inspired rip-off, Grizzly, entitled Grizzly II: The Predator. Also known as, Grizzly II: The Concert and Predator: The Concert.

Under the supervision of an unknown (never to be heard from again) director, and the co-producer & writer of the first film, Grizzly II: The Predator began filming in the early 80's in the Country of Hungary. So Hungary was chosen as the location for a film who's plot centers around a rock concert in the open, desolate woods. I guess the State of Vermont wasn't interested. As to what exactly happened to the film, between rumored problems with the animatronic bear, money issues and the film crew's equipment being seized by the Hungarian government, Grizzly II seemed dead on arrival. It took nearly 20 years before a semi finished work-print traveled around the horror circuit. Yet how fitting that a film about a killer grizzly would be missing one small factor...A BEAR! Scenes involving the grizzly were held off until the final weeks of production. That didn't exactly pan out.

So the film begins with footage of a random poacher who is quickly knocked off screen by the bear's monstrous arm. And that is the last you'll see of the grizzly until the final climax. Oh but you'll know when the bear is close due to it's signature growl, which sounds like pigs being slaughtered. Let's get back to the concert that's in the making, since that's where most of the movie takes place. While the staff of this Woodstock-lite gathering prepares the stage, we are treated to an endless loop of Michael Jackson music in the background. Maybe that's why this was never released, Jackson could have raked in the cash from copyright infringement.

Grizzly II: The Predator has so many recognizable faces, it should be a drinking game. Academy Award winner Louise Fletcher plays a greedy, business woman who will stop at nothing to make sure this concert goes as planned. This requires having nearly every park ranger in sight to act as security. It certainly seems like a better option than hiring the Hell's Angels. Back at the woods, word is getting around that a giant grizzly is on the loose killing people. Have no fear, Gimly from The Lord of the Rings trilogy (John Rhys-Davies) and a ensemble cast of "Hey I know that guy" actors are on the hunt. Also we have Laura Dern, Charlie Sheen & George F'N Clooney. All of which I'm sure would deny their participation in this piece of garbage. Unfortunately the three young upstarts don't have much screen time. While Sheen's character heads off to dreamland to reminisce of better times, like being on the set of Platoon, Dern and Clooney, stay up for some late night activities. An appearance from Jason Voorhees could really save this scene, but both are killed off by the camera man...oops, I mean bear. Sure, let's go with that. Meanwhile, 'Wild Thing' Ricky Vaughn jumps in a Tiger Blood fueled rocket ship destined for the Moon. Spoiler alert: he dies too. 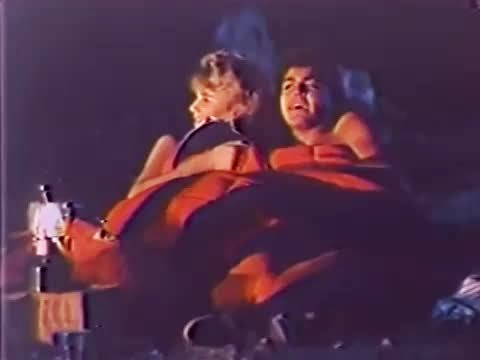 Thirty minutes into the film, the stage crew is still working to get things in place for the big show. And yet no one has grown tired of hearing the same Michael Jackson songs over and over. The poachers in the Hungarian woods are still on the hunt for what we learn is a 20 foot tall bear. So not much has changed since the beginning. We do have the Chief Park Ranger (Steve Inwood) who tries to warn Nurse Ratched (Fletcher) that a deadly grizzly is on the loose. She ignores the cry for help because people need to hear 1980's new-wave and damn it they're going to get it. Let's face it, the last time Louise Fletcher and someone named 'Chief' we're in the same film, it didn't end well either. Actress Deborah Raffin plays opposite of Inwood's character, and remains optimistic about the grizzly's reasons for attacking. It is totally possible this is all a big misunderstanding, maybe the bear is just looking for a picnic basket.

At the half way point we finally get a look at the live musical acts for GrizzlyFest '83. And when you see them perform you'll pray to hear 'Billie Jean' or 'Wanna Be Starting Something' again. More back and forth footage of what's going on in the woods. Which means characters are being killed off screen because WE HAVE NO BEAR. Though it is quite amusing to see the camera man's reflection among the rocks. One of the film's many highlights comes towards the one hour mark, where we witness a sound check that goes on for several minutes. It's literally footage of someone doing a mic check.

Since there is no such thing as a time-lapse in this film, we go from having an empty concert field to the entire population of Central Europe showing up. In the meantime our head hunter (Rhys-Davies), has been preparing for his inevitable meet up with the grizzly. I bet he spent his time thinking of all the horrible things he was going to tell his agent. Seriously, he went from starring in Raiders of the Lost Ark to Grizzly II. Back to the chief and his female companion, they soon get word that the grizzly is approaching the concert area. Now again just to mention, this is an unfinished film. Though you only get hints of that during the first three quarters. All of that changes in the final 10 minutes.

The ending sequence of Grizzly II: The Predator contains:
- The sound completely cutting in and out.
- Multiple takes and angles of several scenes. All without sound.
- Numerous times 'cut' & 'action' are heard during scenes.
- Explosions are set off with no connection to each other.
- Characters reacting to things that are not seen on screen.

Did I mention while all this is happening, the concert is still going on. This crowd is either unbelievably dumb or is in a complete trance with the 'Frankie Goes to Hollywood' type music. It's not a complete loss though, we sort of get an idea as to what the bear was going to look like. As far as what becomes of the beast, we get a final shot of it being restrained within the side of the concert stage. It's very unclear as to what happened or how we got to this point. 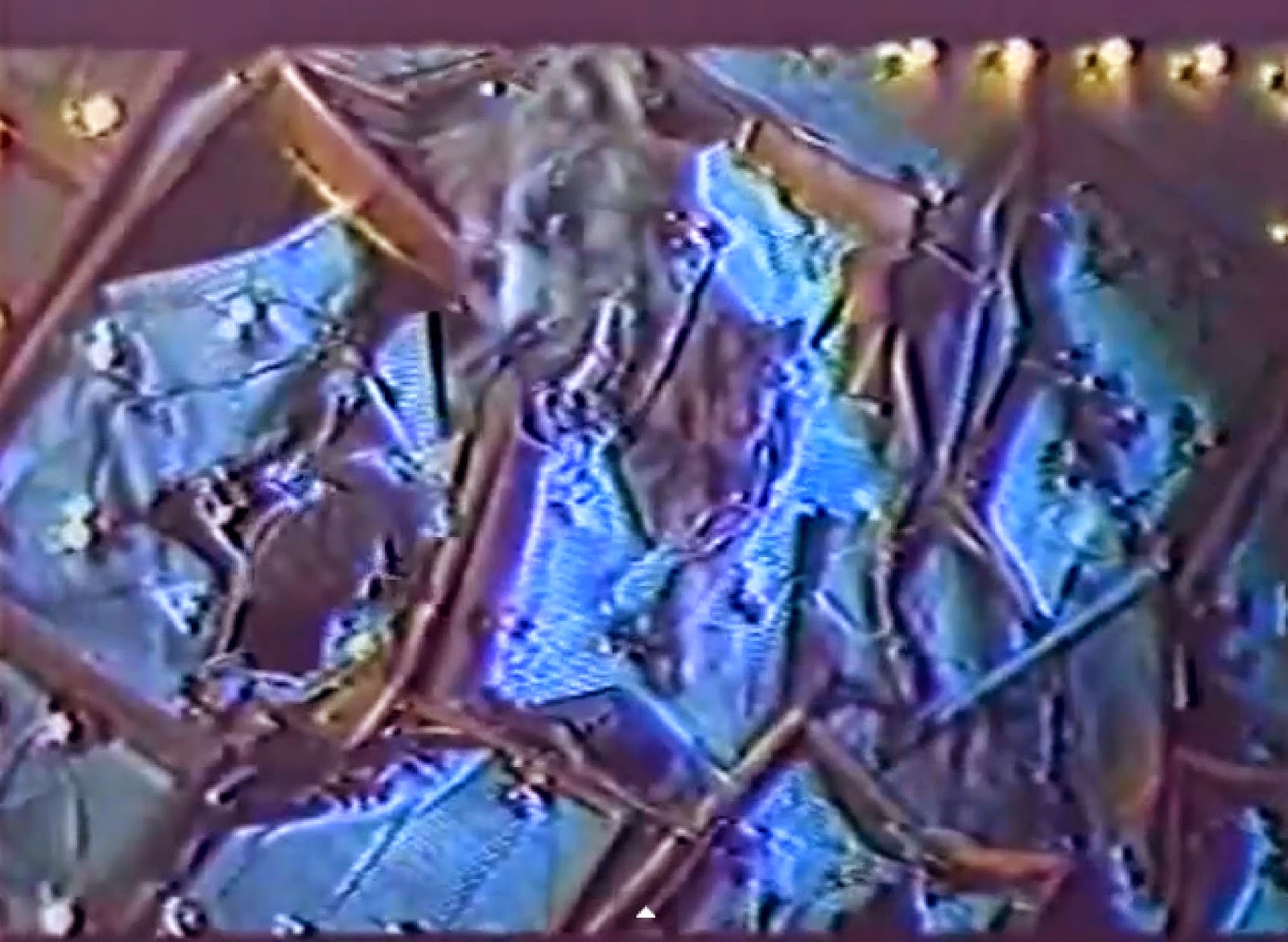 No ending credits, the film comes to a conclusion with the crowd celebrating. Cheering because the concert is over? Cheering because the grizzly is dead? Though I doubt the latter, no one seemed to notice that some serious bear chaos was happening right next to them. Or maybe the concert-goers are much like the viewers of this film. The only thing they saw was some dreadful lip syncing.

Despite it's many, and it does have many obvious flaws, the film at times is fun to watch. Especially if you enjoy bad cinema, and that's the only reason for seeking this out. The fact that Grizzly II never was or will be officially released, is what keeps it from being celebrated for it's awfulness. If you need visual evidence of that, see for yourself.