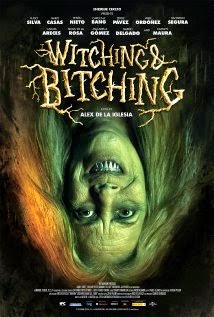 WITCHING AND BITCHING is a return to Alex de la Iglesia’s days of freewheeling comic genre benders after churning out the weighty historical drama The Last Circus. His knack for spectacle is ever present, only here his imagination’s whims seem endowed by a thriving budget. WITCHING  harkens back to the earliest films of Iglesia’s filmography that caught my attention: Accion Mutante, Dia De La Bestia…comedic sendups both of science fiction and horror respectively with as much bona fide love for the genres as there are pokes of jest.

In a downtown area of Madrid, teeming with bustling masses rubbing shoulders as religious fanatics cry warnings of a coming apocalypse, a nerve-wracking bank holdup takes place. It’s based around a sight gag so ridiculous, it dares viewers to try and maintain a straight face. Not only is a member of the brazen stickup crew an diminutive adolescent boy, but said minor is also the son of the stickup crew’s leader. It’s his day to be with his son according to a child custody agreement, and no way is he going to let a little armed robbery get in the way of his fatherly obligations. Especially with an unsympathetic ex wife whom we should presume would make rescheduling nothing short of murder. It’s one of many shots fired in an ongoing battle of the sexes waged in the not so subtle backdrop. 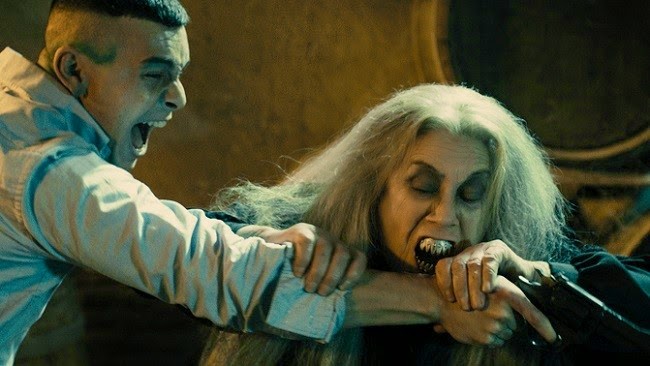 From high anxiety heist, things shift gears into a road trip of makeshift male allies, not so much testosterone driven as it is fueled by frustration with the female sex. The driver of an overtaken taxi has a rather speedy Stockholm-inspired empathy for his hijackers and eagerly joins the gang.  Here would begin a lot of the “bitching” about the women in their lives.

Not content with just one genre changeup, Iglesia puts the crew con course toward an eerie backwoods town where the film spends most of its time, reveling in lavish set pieces that the imaginative director could probably only dream of when toiling away at his earlier filmography. A coven of witches reveals itself to have a vested interest in more than it would at first appear, and as various entities converge on the bewitched town of Zugarramurdi, de la Iglesia begins wielding his conductor’s baton wildly, stirring up a batch of orchestrated chaos of enormous proportions. Not surprisingly, numerous agendas are at play, which range from world domination to more personal conquests of the heart’s desire.

While all of this action flies fast and furiously, and with a liberal doses of humor injected throughout, one can’t help but notice that at the heart of all of these conflicts is something of a wounded outlook toward women. They would seem to be at the root of all the film’s grander schemes while men serve as unwitting, often besieged pawns and victims.  When not sharing their woes in the cramped quarters of a taxi, they are literally tossed about, hurtling through the air headlong into towering stone walls, by female aggressors. I’ve often confused the English title with such variations as ‘Witches and Bitches’ because indeed female characters fall into one category or the other if not both (in its native Mexico the film bares the far less charged title ‘Las Brujas de Zugarramurdi’ or simply The Witches of Zugarramurdi) Even the main character’s ex-wife becomes less comically and more genuinely vindictive. You’d think she might have our sympathies for being a tad upset over her son being used in a violent crime, but she comes off more like the wet blanket being cast over the dreamer/felon’s playful ambitions.  The film’s ideal woman would appear to be young and blonde and willing to sacrifice herself for a man who has just the right devilish charm as our protagonist, although even she is prone to hysterical fits, driven more by emotion than rationality.

So, while WITCHING may not progress attitudes toward the feminist cause, it could very well be a genuine expression of the director’s vexations with women, seeing himself as something of an outlaw along the lines of the main character, trying to do well, and just looking for a little understanding from his more grounded partner. (This is all speculation mind you. A Wiki search may or may not reveal a completely different narrative.)

And whether de la Iglesia does or doesn’t have his share of female troubles shading his world view, he is still thrilled with confounding traditional conventions of the status quo.  WITCHING is populated with numerous nonconformist couples: a pair of detectives with a bottled up attraction bubbling beneath the surface of their good cop, bad cop routine; transvestite witches that peck away at the core family of powerful conjurers running the show in Zugarramurdi…These less widely accepted are characterized no more or less seriously than the rest of the cartoonish cast, but in their presence one can imagine de la Iglesia grinning slyly at the thought of provoking those that might disapprove.

Meanwhile, de la Iglesia suggests a certainpower amongst all of his characters; that of having a voice. It is a garrulous film with characters constantly debating, feeling no hesitancy to bandy about their opinion no matter the situation, be it staring into the end of a shotgun barrel, or in or in wait of becoming the sacrificial meal of a mammoth monstrosity.

WITCHING AND BITCHING opens in theaters on June 13th and will also be available On Demand from IFC On Demand. In New York City, it will play at the IFC CENTER at midnight.