Brief word on Chantal Akerman, From Here (2010) which is playing for free at Lincoln Center starting Friday 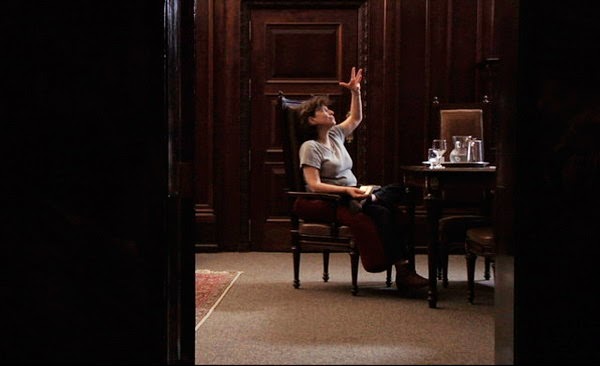 Playing for a week for free in the amphitheater at Lincoln Center's Film Center is this one hour interview with director Chantal Akerman. It is screening to tie into the theatrical release of her One Day Pina Asked...

The film consists of a single take shot through a doorway (see above) of Akerman sitting in a straight back chair talking. To be perfectly honest the film is shot so as to seem as though we are eavesdropping on the director so we watch as she comes in, adjusts herself, makes small talk and what ever before the interview and then we watch as the interview breaks up at the end. The whole thing runs just over an hour with about 45 or 50 minutes of  actual interview.

How is it? Not bad. Forgive the casual attitude but I'm not an Akerman fan. I've on;y seen a couple of her films and most of them have not floated my boat. I've seen her films but they never really stuck in the grey cells.  As you may know I did love One Day Pina Asked... but outside of that I really don't have a real opinion about her and her films.

That said If you are a fan this is required viewing,
Posted by Steve Kopian at June 03, 2014