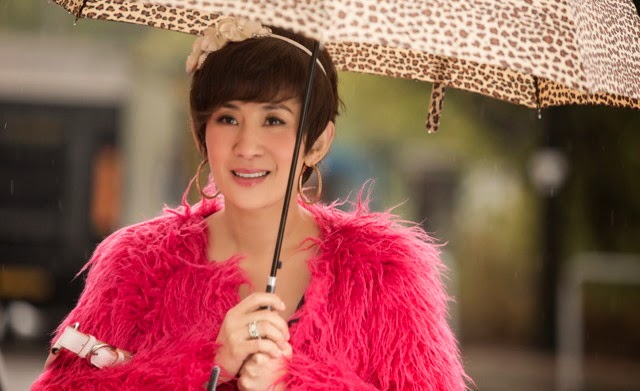 The opening night film (but not opening film that's Overheard 3)at this year's New York Asian Film Festival is Sandra Ng's return to the Golden Chicken franchise and its a great deal of fun. Actually its frequently hysterically funny and any lover of Hong Kong films should see it for all of the cameos.

The episodic film follows Ng's Kam as she gives us a history of her profession before moving on to the difficulties of being a madam in today's Hong Kong with a look at what happens in a day, on to fulfilling the wishes of a client who wants to sleep with a famous star on to spicing up how she does what she does  In there is a quest for love and a few musical numbers as well.

If that's vague it's intentional because now that I've seen the film I'm tempted to tell you all of the jokes and all of the cameos. Revealing too much will wreck the surprises and perhaps telegraph some of the punch lines.

A bawdy adult sex romp this is joyously innocent in a way. Yea its a sex comedy, but its also utterly charming, there is no way you could ever be offended by the film. In a weird way it has a childlike approach to the sex which makes it even more endearing.

One of the joys of the film are the cameos with the big stars and familiar faces sending themselves and their roles up. If you've been following Asian films over the last decade or so odds are you're going to find this funnier than a person who doesn't know who some of the actors and their roles are.

Is it perfect? No. The film kind of loses steam in the second half as the anything goes energy that drove it for the first 45 minutes gets kind of side tracked with a plot and homage to the  gangster gets out of prison genre. Its  not bad but the rapid fire laughs disappear and the shift in tone feels slightly awkward- even if the film ends with a musical number that returns it all to manic silliness during the end credits.

Reservations aside if you love Asian film and Hong Kong films in particular you MUST see this. Trust me. This is a fun time especially if you can see it at something like the New York Asian Film Festival where the theater will be filled with people who'll get the jokes.

For tickets go to the Festival Website here.
Posted by Steve Kopian at June 26, 2014