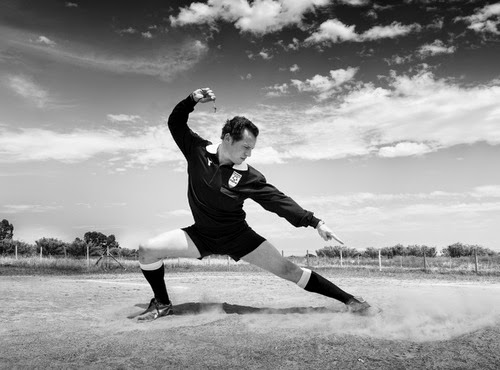 Great looking black and white film concerns a low level soccer team, a rude land owner, two farmer/players trying to deal with sheep breeding, a returning player from Argentina and a referee with his own agenda.

as it says in the headline this film didn't blow my skirt up. No, it's not bad, the trouble is that compared to some of the other films playing at Open Roads the film kind of pales. I know that isn't fair but its true. If you've seen some of the other films that I've reviewed over the last week you'll find that this is a not quite as good.

I know the problem with the film is that the film is insistently showy. This first feature by Paolo Zucca is full of touches that make it clear that he is trying to impress. From team workout choreographed as if they were Busby Berkley dance numbers (they are pretty cool), to overly artistic photography, to other touches that make the film more about the form then the content. Watching the film I kept thinking of Gueros which had a flashy first fifteen minutes and then settled down into an amazing film.

This is not an amazing movie. Its a good one.