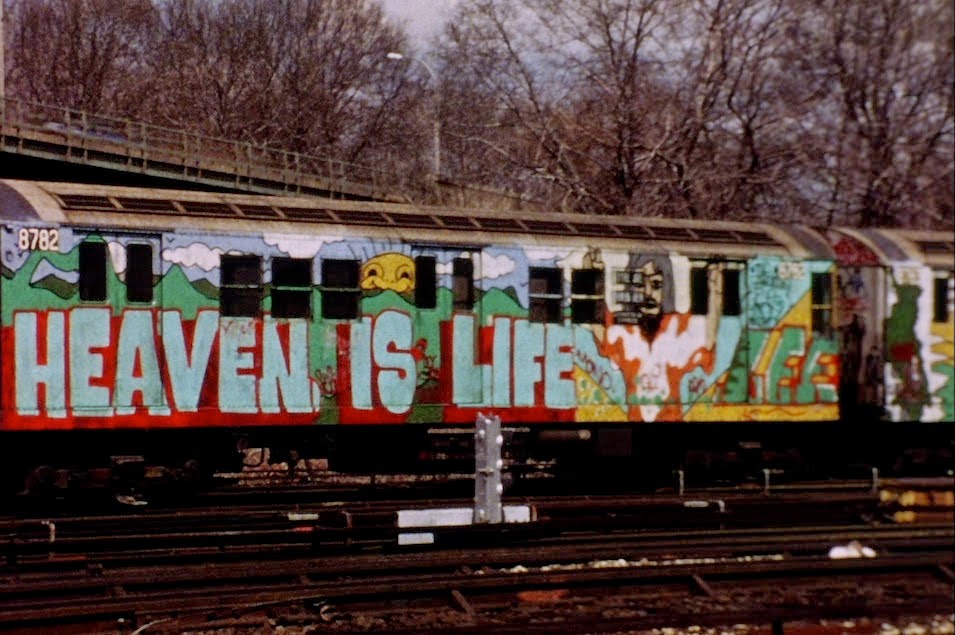 Stations of the Elevated is a visual poem about graffiti (particularly on subways), billboards and various landscapes,. Sometimes it has naturalistic sounds and sometimes it has music by Charles Mingus. It runs 45 minutes.

I’m kind of at a loss at what to say about the film. Taking it head on as a film Its 45 minutes of various forms of graffiti both legal (billboards) and illegal (on the side of trains and buildings). It’s a trippy film that one falls into. The problem is that after a while it kind of trails off. We’re watching the same trains over and over again, seeing the same images over and over again over the 45 minutes. After about 20 minutes I was falling asleep.

As a historical document, of New York and graffiti in the late 1970’s its an important document. It’s a film that takes urban blight and street art and turns it into to what many would consider a higher art form. It’s a film that shows us what things looked like back in the bad old days.

Sadly I don’t think that’s really enough to get you to say go out to BAM where the film is playing tonight and pay 25 bucks to see it. Yes the film will be preceded by 45 minutes of live music, but the film itself doesn’t warrant the out lay of money. Had the film been shown as part of a gallery installation where you could walk in and out on it and where it had other pieces of art this might have been something, but taken on it’s own terms this is more a historical footnote for those interested in the history of the art is depicts then a lost cinematic masterpiece. Worth seeing if you can do so with something else, like museum admission (it plays the Museum of the City of New York August 14th) but not on its own terms.
Posted by Steve Kopian at June 27, 2014