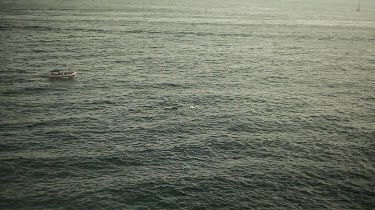 Iva Radivojevic's five part examination of life in Cyprus as both a metaphor for and straight forward examination of the immigration problems that are currently playing out across the world is a heady mix of fact and meditation that has me looking forward to seeing it again.

Radivojevic is an immigrant to the island nation, having moved there after her home country of Yugoslavia splintered into multiple republics. This ability to look at what's happening in her new homeland from broth the long term resident and new comer really sets the film apart from almost any other film on the great human migration.

Told in a style that in many ways is more essay then documentary Radivojevic sucks us in with beautiful images that she counterpoints with the stories of refugees who end up washing up on the shores of Cyprus. Cyprus is the choice of many looking to get into an EU country  because in part its close to the Middle Eastern and African countries they are fleeing, but also because things are a little easier.The film the film then shifts to examining the various facets, who gets to stay, what life is like for the immigrants and what do the native people think. Its a heady mix that gives you much to think about.

to be quite honest I need to see the film again. I got about half an hour into the film and I stopped taking notes, partly because I was into what the film was saying and doing, mostly because by talking a couple of seconds to look down and scribble something I was missing something else, worse the carefully spell the film was casting kept getting broken. I didn't want that so I stopped the intellectual dissection of the film and just let it wash over me.

Ultimately this is great little film. Its a film that does what any good documentary should do which is instead of being about one thing- Cyprus- its about something bigger, namely immigration.

One of the must see films at this year's Human Rights Watch Film Festival
Posted by Steve Kopian at June 11, 2014