The impossibility of writing about Coherence (2013) 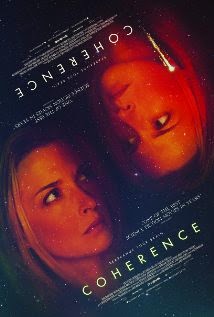 I'm kind of limited in what I can say about this film.

I can tell you the barest of plots-a group of eight people get together for dinner on the night a comet flies by only to have weird things happen....

...but I can't really discuss it beyond that lest all of the drama and mystery will be gone. I could try to talk around it but ultimate say nothing and then this review will sound like pretty much every other review out there that is struggling not to reveal anything.

My initial plan to get around this was to email several people I thought might be reviewing it and trick them into discussing the film.The idea being that I could steal what they were going to say and cobble the bits together to make something my own. That failed miserably since anyone I mentioned the film to hadn't seen it yet- and since I had other things I needed to write up I couldn't wait for them to do so- so I went out and read some reviews.

In reading the reviews I came up with several things about the film that everyone agrees on,first it's impossible to really write about the film for an audience who hasn't seen it since to do so will result in way too much being revealed since the whole film is a series of flip flops in plot. The problem is that the film is so tightly plotted so that anything past the set up ultimately affects something later in the film. This is one of those films you'll need to see a second time just so you can see it knowing how it all fits together. Its a brilliant piece of plotting, that was largely improvised (How they did it is beyond me). Any review I've read that actually discusses the plot in any detail kinds of ruins the film since in every spoiler filled review something was revealed that wrecked something in the film. I will not do that.

The second agreed upon point is that the the film is like a certain TV show, which I won't mention since it will prejudice your feelings. I'm just going to let that one lie there since it doesn't reveal anything and even if it does the film is too damn good for it to matter.

And the last thing I realized that this is a good film that everyone admires for its attempt at doing something more even if they don't love it. You can't help but admire a film that manages to be so well plotted.

My feelings for the most part fall into those slots, though I would say its inde-drama stylings are a nice change of pace...with a great kick in the ass.

This is a really really good film. It's an intelligent film, way more intelligent than 95% of other films out there and a wonderful change of pace as far as science fiction films go. Its a film you really need to make an effort to see.

However this is not a film I can talk about until you see it.

I tell you what- the film opens tomorrow- and if you go see it you can email me and we'll talk about it then, hows that? That way we won't spoil it for anyone.
Posted by Steve Kopian at June 19, 2014