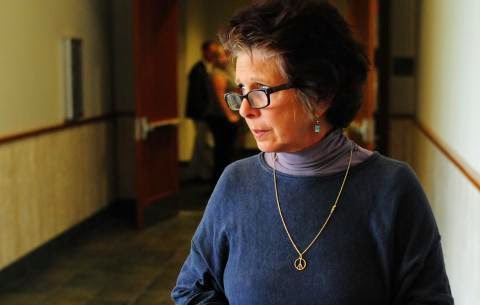 Opening night film of the Human Rights Watch Film Festival  is the HBO film Private Violence and if you can score a ticket go.

Telling the dual stories of Deanna Walters, a woman who seeks justice after being kidnapped and brutalized by her estranged husband, and Kit Gruelle, a woman who helps domestic violence survivors and who is one herself, this film is a kick in the chest. Actually from the first moments it kind of sucks the air out of you and see, really see what these women are going through.

The power of the film is that we really see the lives of these women. We see everything that is going on around them. We see more than just a moment here or there. We see it all the before, during and after. We also get a real sense of the stakes that are being played for since it's clear that if some of the abusers we see were allowed to continue the abuse the women would be dead.

You'll forgive the brevity and awkwardness of this piece but to be honest my reaction to the film is much too emotional, much too visceral for proper words. That may make a poor review from the readers stand point but from the stand point  of changing minds and laws that's a good thing since the anger will bring change.

For tickets and further information go to the festival website

If you can't make the film tomorrow it will play on HBO in October
Posted by Steve Kopian at June 11, 2014