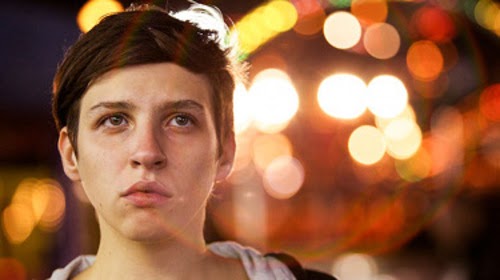 A coming of age story has 17 year old Grazia trying to deal come to terms with her life and the secrets that her family keeps and refuse to deal with allowing no sort of closure or worse understanding of the events that are transpiring around her. No one talks about her brother who has been dead the last five years. No one talks about the end of their livelihood thanks to the local crime organization making an offer they can't refuse.  No one wants to deal with life lest it get worse. Grazia no longer is able to bear it and begins to take steps to get out.

Miriam Karlkvist gives a striking performance as Grazia. Dressed essentially in male drag it takes awhile before you realize that she is really a girl. Its a wonderfully nuanced performance that transcends the normal acting performance since much of the acting is physical, the result of her world being one where no speaks or expresses anything except in outbursts or talking about things that don't matter. Because of the lack of communication talking does hurt people.

This is a small scale gem of the film I's a film that works because the characters. These are people I know, and in some case I see bits of myself in them. While I don't have their troubles I see how their fighting to keep the status quo makes them think they are safe.

I know that the intrusion of a bit of magical realism in the film is not going to sit well with some people, but for me it worked nicely since its not over done.

Definitely worth making an effort to see.