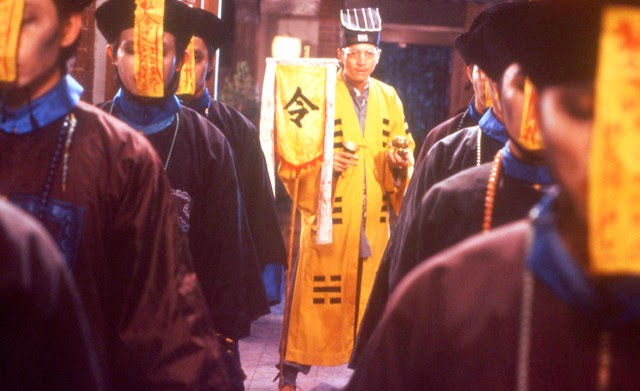 I’ve seen this film several time over the years and to be perfectly honest the plot has never stuck with me. I recently watched the film again because it was playing at the Asian Film Festival and I quickly realized that the film’s plot makes no sense and it kind of exists just to keep the laughs and the scares coming. If I were to make a stab at explaining the plot it would go like this:

Mr Kau a Taoist priest  specializes in controlling and eliminating spirits and vampires. When he is moving  the uncle of a rich man he realizes that the deceased is really a vampire- however in taking the body for study it's allowed to escape. Meanwhile a beautiful woman,actually a malicious spirit is running rampant in the countryside. The two stories collide as does romance between several of the characters

As I said above the point of the film isn’t the plot rather it’s simply to keep things moving for 90 minutes.

To be honest I’m kind of at a loss the explain why this film was so influential. The film unleashed a huge wave of horror and horror comedies upon the world with this film getting I believe 4 direct sequels and dozens of indirect ones and rip offs (including the inevitable porn ones-you haven’t lived until you’ve seen hopping zombie sex). Until the coming of the internet it was difficult to know what film a or wasn’t related because of re-titlings and because Lam Ching-ying, who played the uni-browed Taoist, played similar roles in I don’t know how many other films. For whatever reason this film hit a nerve and we ended up with a rash of supernatural horror comedies including the classic Chinese Ghost Story films .

My loss at why the film was so game changing is the result of the film being solidly good but not great. As I’ve said I’ve seen the film several times over the years and I’ve enjoyed it every time, but I’m always left scratching my hear wondering why this film clicked with audiences. It’s a great film full of laughs and scares and martial arts but it’s not the be all and end all horror comedy.

Now if you’re in the New York area or you’re going to be in the area on July 4th you absolutely MUST go to see this and the film it inspired Rigor Mortis when they play back to back Trust me that’s a double feature for the ages and the thought of seeing an intro from the guys at NYAFF on the films and the genre is almost too good to pass up.
Posted by Steve Kopian at June 30, 2014