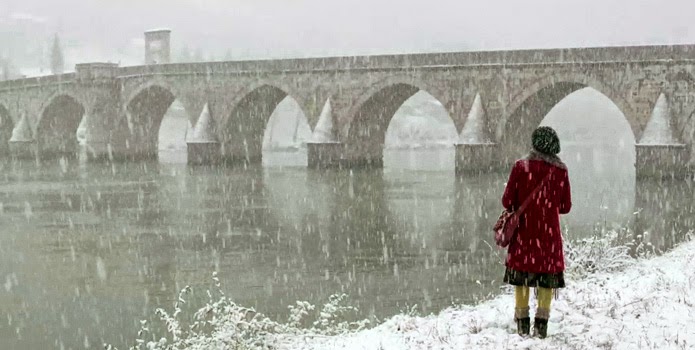 Kym Vercoe plays a woman from Australia travels to Bosnia on vacation. While traveling around she stays in a hotel that she later finds out was used as a concentration camp.  While she is at first horrified at having been in a place that was where so many died, she's even more upset that not only didn't her guide book mention what happened but there is a weird silence in the village about the atrocities. Wanting answers she returns to "the scenes of the crime" to get answers

This is a good film about a difficult subject. The collision of how past crimes are remembered or not remembered is unfortunately a subject that we in this world are going to constantly have to deal with. How do we deal with the genocides in places like Bosnia, or say a terrorist attack like 9/11? How do you balance the need to remember so that it doesn't happen again with the desire for the parties involved who may want their little piece of infamy to just go away?

Its a difficult question and one that doesn't have easy answers.

For me this is more a film that I admire more than I love. I like what it is trying to do but at the same time I wish it wasn't so strident and preachy...actually its not that it's more that the film kind of insists that it is about something important and damn it you're going to listen. Yes it is about something, and yes I'm going to listen but could you please balance your tone which has flip flops  from wonderful slices of life bits to really important staged bits with our heroine on a kind of high horse. After a while I turned off. yea I stayed to the end but at the same time I walked away from the film feeling disappointed.

(In the films favor I will say that had I not seen some of the other wonderful films at the Human Rights Watch Film Festival I I think this would have played better)
Posted by Steve Kopian at June 14, 2014