My day 2 at NYAFF 2014- AS THE LIGHTS GO OUT, KANO and 2 mistakes from Kiyoshi Kurasowa

My second day of the New York Asian Film Festival was a long one. I was out of my house around 10am and I got home around 1am. It was three programs with a lunch break in the middle.

Arriving at the Walter Reade I was lucky enough to go in with Grady Hendrix. We fell into a discussion about SNOWPIERCER and the meaning of the film and the darkness that’s contained in the ending. It went on for a while and blossomed as Joe Bendel joined in and when Grady brought up the graphic novel I roped in Alec Kubus-Meyer to discuss the differences. If you want to know why I love the festival it’s because you get these great talks. 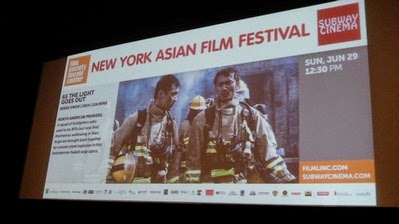 The first film was AS THE LIGHTS GO OUT. It’s a fire fighter drama about a burning electrical plant that ends up causing problems for Hong Kong. If you want a definition of macho bro-mance this is it. While Grady suggested it was so testosterone filled we’d all be pregnant by the end I think more likely a better use would be as a testosterone supplement.

The film has fantastic action sequence but the plot is so contrived- a natural gas pipeline near an earlier fire causes a fire to travel down the line and blow up the plant-on Christmas eve-as son of one of the fire fighters and some his friends go missing on a class trip to the plant-as a typhoon hits- and there is a black out as a result that prevents back up from arriving. I think there are a few more cliches...er...twists including Simon Yam as the old guy about to retire…

It’s a long movie that will leave you exhausted y its craziness. The action is way cool, the rest is really really silly.

I went to lunch as Alec and Mr C went to see WHITE STORM which everyone told me Grady over sold as “like drinking lite beer for years and then being given a big rail of cocaine.” I admit I have been pushing it a bit because everyone else has been and it has crazy ass action but ultimately I do agree with Alec and C and have reservations (my review is here).

Instead of going to the movie I went to lunch with Joe Bendel. We sat and shot the breeze for a bit before he headed off to catch up on writing and I wandered Lincoln Center to kill a little time and maybe get tickets.

I’d like to smack some ladies I saw on line at the Avery Fisher box office. I was going to try and get tickets for Cate Blanchett in The Maids in August, but the line was too long. The women I wanted to smack were picking on the Box Office person because she couldn’t give them the seats they wanted. I wanted to say “What part of those tickets were sold didn’t you understand?” I then ended up wandering around under the complex just looking around. Way cool but kind of creepy because it was so empty. 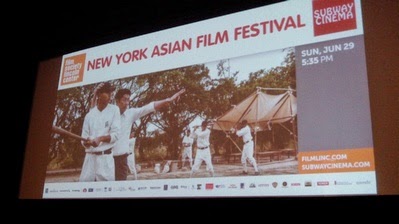 I got back to the Walter Reade just as a press shoot with Umin Boya director of KANO was going on. I squeezed myself into the press line and shot a bunch of pictures (More over at Tumblr). I was then pulled outside by the ever lovely Lee and onto the line for KANO ticketholders. As always seeing Lee is a treat and a half. She is a wonderful young lady and it’s a blast to talk to her. While on line we chatted and watched Boya who had escaped the photgraphers and was now being interviewed across the plaza.

Going in I separated from Lee wanting to get down in front for photographs of the Q&A. I should have stayed with her since I got a couple of Photographs and then my camera froze…which it seems to do at the festival.

I’m going to do a full review of KANO on Wednesday, but just know it’s a three hour and five minute emotional ball of love for baseball and the guys in the film. It’s the story of a high school team in Taiwan in 1931 who managed to get to the high school championships in Japan. It’s a messy movie that manages to overcome every problem with its unwieldy script to move you to tears. People around me were wiping tears away. Yea it’s that sort of a movie and it’s that damn good.

I may get flack for this but the Q&A was painful. Running 35 or 40 minutes and only covering about 5 questions the problem was that director Boya likes to ramble. Giving minutes long answers to each question there was lots of dead space as he answered in full and then the answer was translated into English. It was horrible. I turned off, and I would have walked out but I was too close to the stage to do so without creating a major incident (sometimes sitting up close and talking to the moderator before the film is not a good idea.)

For the record about 90% of the film was true, and the pitcher’s finger issue while not reported in stories of the time did come from players who were interviewed. 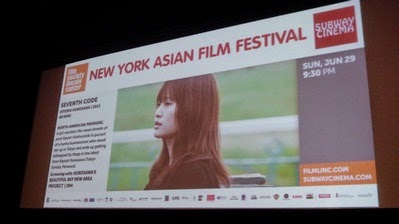 The final program was two Kiyoshi Kurasowa short films. The films are from the part of his personality that make films that leave you shaking your head. These are head shakers on the order of the Revenge films and a few others where the director seems to be doing something other than making a good film. He tends to do this when there is one thing about a project (like a fight sequence or shooting location) that he makes it worth while for him- but rarely the audience.

The first film was BEAUTIFUL NEW BAY AREA PROJECT and it concerned a rich man who wants to pull down all the factories around a dock. He falls into an obsession about a female dock worker who wants nothing from him. He then steals her name plate and she goes to get it back resulting a fight that fills the second half of this 29 minute film. The fight is great-the rest, including allusions to a new virus and the girl being an undersea creature is terrible.

The second film 7TH CODE is another head scratcher. A young woman goes to Vladivostok to chase down a man she met a month earlier in a bar in Japan. She follows him pilling a wheeled suitcase behind her. After being polite he ends up having her roughed up, her luggage stolen and after being sewn in a burlap sack dumped on the outskirts of town. She is undeterred and continues to try and find him falling in with a Chinese girl and her Japanese boyfriend who runs a restaurant that no one goes to. I won’t say where it goes from there (nowhere) but it does change explosively in the last 10 or 15 minutes with some WTF moments including a music video. It's as if they took parts from other films and grafted them on to the first 45. I was so silly that I was roaring with uncontrollable laughter at the end. I couldn’t believe it ended like that…

…mostly I couldn’t believe I paid to see the films. If Kiyoshi Kurasowa never attains true international super stardom beyond the art house it will because he turns out WTF trash like the films last night.

Movies done after 11- I headed home. Between the trains and ride home It was going to be two more hours before I got int my house.

I’m off from the festival until either Friday or Saturday. However stuff will still be filling Unseen so keep reading.
Posted by Steve Kopian at June 30, 2014