I love this movie. 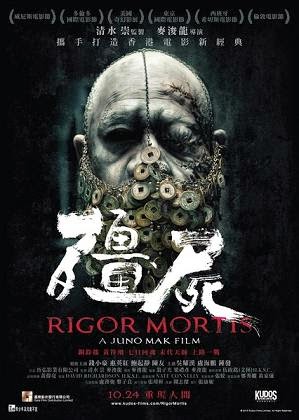 I saw this film back in May and started to tell everyone about it...and I'm still talking about it.

The plot of the film has a down on his luck actor moving into a new apartment building. Its a run down place with odd neighbors, some living, some dead. it isn't long before the forces of the living and the dead come into conflict...

I'm being intentionally unclear because this is a film that better to see than read about. Actually its bets to see it in a dark theater with an audience and I'm hoping to catch the film at the New York Asian Film Festival screening since it will be filled with people who are ready for a film like this. Wellgo released the film into theaters back on June 6 as well as VOD but I avoided it because I'm picking the audience I'm seeing this with. (It plays at the New York Asian Festival July fourth and hits DVD shortly there after)

This is a film with style and mood to burn. It has such an awesome look that I can't believe Wellgo has chosen the poster it has for the film since the original Chinese one (see above) is so much better. The look of the film makes you feel uneasy. Not only does it make you feel uneasy it does so in such a manner that you feel creeped out even though you know the film is messing with you.

The plot is suitably dream like, drifting from thing to thing, weird event to weird event, sucking you down the rabbit hole. Its the sort of film that you're dismissing one minute and sitting on the edge of your seat the next. Its creepy all along the way, so much so that I'm glad I saw this in the middle of a sunny Sunday afternoon instead of in the dark of the night because I don't want this film in my dreams.

If you love horror, I mean really good horror- see this film- just don't do it late at night when you're alone.

And remember- what ever you do don't take off the mask.

( This piece was originally written for the theatrical release but I decided to go with Mondocurry's piece for theaters and hold mine for the festival. To see Mondo's original piece it can be found here)
Posted by Steve Kopian at June 27, 2014