Life is great BIG JOY is on DVD 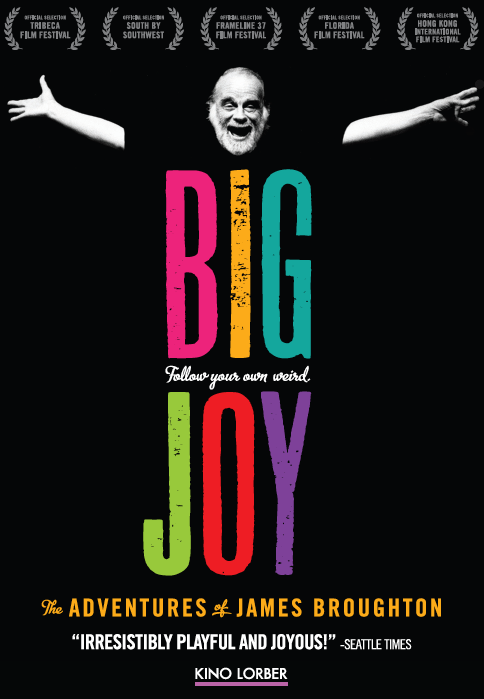 When in doubt, twirl - James Broughton


Yesterday when I got home from work there was a large padded envelope between my front door and the screen door. When I picked it up and saw where it was from I let out a loud joyous yelp that frightened the people in my house.

“Because I now have Big Joy”

Dad looked at me completely confused until I held out the DVD and he saw the picture of James Broughton and the words Big Joy.

I then ran over to the TV and popped in the DVD and began to smile like an absolute crazy person.

For those who don’t know Big Joy is the life story of poet, filmmaker, and madman James Broughton. Boughton was born in 1913 to wealthy parents. When he grew up he was part of the San Francisco Renaissance which predated the Beats, wrote poetry and plays, was one of the pioneers of experimental film, broke down some of the restrictions on censorship through the use of nudity in his movies, loved both men and women as well as having children with critic Pauline Kael.

Those of you who read Unseen with any regularity probably know that I saw Big Joy last year at Tribeca and I loved it putting it on my best of the year list. (My original piece can be found here). I’ve been tweeting my review of the film repeatedly over the last year whenever I caught that the film was playing somewhere.

I found out about it coming out on DVD very close to the release date when I got an email asking about doing some coverage. Debating whether or not to rerun the original review or take a look at the DVD I opted to look at the DVD because the disc included a bunch of extras. I also opted to take a look again because I wanted to make sure that the film really was a wonderful as I first thought.

Guess what, it is.

Even better it’s still a blast the third time through too. (Okay, yes, that does mean I was up way past my bedtime re-watching the film a second time after watching the film earlier in the evening.)

I don’t know what to say about the film but it makes me happy. There is something about Broughton’s life and the way he attacked it that brings a big ass smile to my face. I love that he kept plugging away trying to find his joy- what ever or where ever that was.

And as I said in my earlier piece don’t think about this film as being gay or anything else, this is just the arc of a life. This is just one man’s story. I think that some of the attractiveness for me is Broughton just went and did and didn’t really seem to worry about labels. He fathered children with Pauline Kael and had wonderful relationships with several men.  So what? As you listen to Broughton’s friends talk it wasn’t a matter of gay or straight its simply life. He was what he was. He simply lived life and found that joy and the film gloriously expresses that joy to the audience, whomever they are.

I mentioned at the top that I wanted to see the DVD because of the extras and they are pretty good too.

Tthe extras on the DVD run approximately an hour long, with the Deleted Scenes taking up the majority of the time. There are 28 minutes of deleted and extended sequences that while adding to your understanding of Broughton were rightly cut out. For example about a third of the cut material is a talk about the historical context of the San Francisco Renaissance, the Berkley Renaissance and the rise of the Beats. It’s a super explanation of the history (some of which is in the film) but if it was in the film it would have been too much to take in and would have stopped the film cold. Seeing it as an extra really does add understanding to the history and adds when you see the film again after watching the sequences. Some of the other bits, like the piece with Broughton’s son add shading once you’ve seen the film but wouldn’t work in the film’s frame work.  (The extra interviews kind of vex me since they didn’t really add much with their brief running time)

Something that’s really cool in the extras are several people reading Broughton’s poetry and its great fun. It’s fun because not only are the poems fun, but it’s also fun because of the way that some of readers get into them. A good poem is a good poem but a good poem well-read is magical, and thanks to this being on the DVD is magic we can revisit. (And if you pop the DVD into your computer you can down load a PDF of all of the poems in the film- yes!)

The extras also has a segment on Broughton’s film Golden Positions with commentary which is pretty cool.

If you haven’t seen this film you need to. The feeling of absolute happiness that this film creates can’t be beat. This is the wonderful story of a life that constantly moved forward searching for the joy in things. It’s a life that could be used as an object lesson for all of us who are looking to do something similar. There is no reason to give up hope joy can be found…just watch the film and you’ll see.

Currently out on Kino Lorber DVD, Bluray and VOD 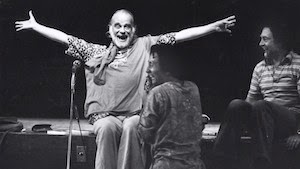