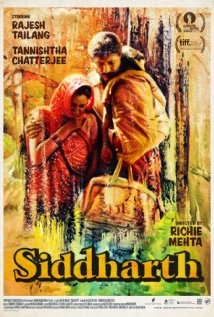 Opening Friday is the film Siddharth. It concerns a father’s frantic search for his missing son whom he sent off to work in a factory belonging to a friend of a friend. I saw the film back in November when it played the South Asian Film Festival here in New York. The film has also played in numerous other film festivals including the just completed Human Rights Watch Film Festival.

Here’s my review from the South Asian Film Festival:

Don't worry, you're the one who sent him away. If you can't find him have another- owner of the shop where the missing boy was working.

Playing tomorrow at the South Asian Film Festival is SIDDHARTH. The film has an impediment to discussing it in that how I feel about the film hinges on the endingand I don't want to say what that is. I say that because I was along for the ride for 99% of the running time, and what happens at the end pushed me into feeling just okay about the film.

The plot of the film concerns a father who sends his 12 year old son away to work in a distant town. His wife's brother in law was asked to help find a boy to replace one who left a friend;s shop and he thought of Siddharth, However something went wrong which is only discovered when the boy doesn't return as scheduled. This sends his parents into a panic. Things are made worse when they find out that the brother in law knew two weeks earlier that the boy had gone missing but didn't say anything figuring he had simply bailed on the job and was just going to come home as planned. Attempting to do everything he can to find him Siddharth's father begins to try and track down the boy's two week old trail.

Shot as a kind of slice of life film there are no grand action set pieces, there is no rapid cutting, there is simply life played out in extended sequences as a father tries to find his only son. Its a troubling tale (the film says its based on a true story) that gets under your skin and hangs with you.

This is life and I'm sure that the story is regrettably played out thousands of times a week across the globe. It's so real at times that it reminds me of a documentary I saw in 2011 at called GONE which had a mother trying to find her missing son in Europe. Like that film SIDDHARTH has an unexpected unresolved conclusion. While GONE's ending works, because that's life and you can't force things to happen a certain way, here in the nominally fictional tale the ending doesn't feel quite right, yes it's ending is life but at the same time it doesn't feel right. No, it's not so much it doesn't feel right, rather it makes you wonder what is the point of telling us this story. (Addendum from June 2014: though to be completely honesteven after 6 months of contemplation  I don't know what ending would have worked and felt satisfying)

Don't take this to mean that my reaction to the film is not a negative one, it's not, I do like most of what the film does and it's worth seeing for that, its just that by the time the end credits role it just somehow missed the mark for me. I wanted to love the film instead I just like it.

The film opens Friday at the Lincoln Plaza Cinemas in New York and the Nuart in Los Angeles July 11
Posted by Steve Kopian at June 25, 2014