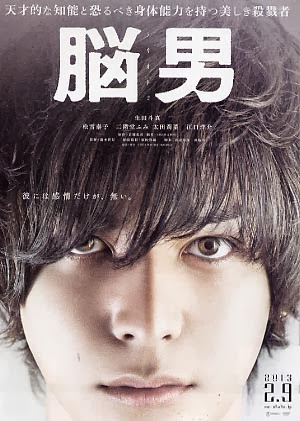 Someone is using ordinary citizens to deliver bombs into various crowded paces. In the wake of a bus bombing the police manage to track down one of the people involved. A strange young man with a near perfect body and seemingly no emotion. The police turn him over to a psychologist who just missed being on the exploded bus to evaluate the man's sanity. However it's clear he had help and his friends are still at large.

Psycho on the loose tale generates a great deal of tension in its own universe, but at the same time is incredibly contrived and doesn't wholly work on any real world level. The problem with the film is that tit, and I'm guessing the source novel as well, asks us to believe way too much, from our enigmatic central character, to the psychologist with way too much on her plate, to the lesbian couple who are the brains of the operation to pretty much every twist and turn. There are too many coincidences to keep a straight face.

And yet the film manages to some how generate a great deal of suspense. Say what you will the film holds your attention. There are some sick things going on and in the same way that you don't look away from a road accident you keep watching to see what the next horrible thing is going to be.

While it's not the best thriller around, it is one that's worth trying should you run across it on something like Netflix or Amazon (the set pieces are pretty cool). Entertaining or no I can't really see paying money to see this at a festival or something.
Posted by Steve Kopian at June 01, 2014