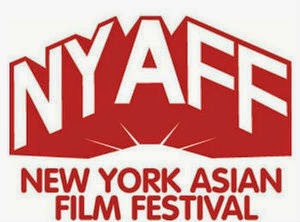 Exactly a month ago I was emailing with Ted Geoghegan about an overheard conversation  where people were speculating about what was going to be playing at the New York Asian Film Festival. As the conversation wound down I remarked that I was looking forward to the festival because it always feels like going home. He replied he felt the same way. And now a month later we're both five days away from going home to Lincoln Center and this years NYAFF.

The truth be told I know a lot of people who feel that way. There is something about the festival that makes everyone feel like family. If you go to the festival for more than one screening you end up seeing the same faces. The more you go the more you realize that there are people just like you out there and by the third screening odds are you're talking to the familiar faces as if you've known them all your life.  And even if you don't talk to anyone, odds are that, unless have no memory, you'll forever be seeing people out and about that you saw at the festival.

No you will, you don't know how many people I run across where we end up eyeing each other only to realize we're NYAFF fans- which instantly makes everything okay as if we're in some secret club. And then when you come back the next year you'll find that you recognize a hell of a lot of people.

For me, and I know others the festival has been the place where we've picked up our new extended families. The Unseen family grew because of it - Mondo and I met on line because of the festival and we first met in person at the festival. Through Mondo I met Shigeko. He also introduced me to Chocko and Mr C. While I had conversed with Peter because of Tribeca we first met in person at a press screening for NYAFF. I met Hubert at a round table interview for Donnie Yen and through him I met Alec. Because of the festival I met Jarrod, Earl, Joel, Kenji, Rufus and lots of others.

Of course its introduced me to lots and lots of films and allowed me to see and meet lots of my favorite stars and directors. Mostly though NYAFF has built my circle of friends and I am forever grateful for that. Because of the festival I now have people who I talk to everyday and in that way the festival is always alive.

For me that's what I mean when I say I'm going home.

I suppose I should talk about the films and what you should see, after all we're starting three weeks of films for NYAFF and Japan Cuts,  but to be honest if you go to NYAFF, and if you do it right, you'll get something better than just a hours in the AC watching movies, you'll end up with some good friends
---

A word regarding this year’s coverage: where in past years we covered all or all but a couple of the films playing the Asian Film Festival, this year we’re going to be shirking and we’ll only be getting about three quarters of the films. You can blame it on the bossa nova but the real reason is that because of schedules, ours and the festivals, and things like the triple locations of the 10th,  it simply isn’t possible to get to everything. The end result is I believe we’re going to miss about a quarter of the titles.

Of course things are still influx and I’m going to see if I can arm twist some coverage from friends of Unseen but for right now some stuff will not be getting reviewed.

For those who are curious as to what films we at Unseen think you must get tickets to here are a few suggestions before the reviews start landing tomorrow.

Eternal Zero- A brother and sister look into the life of their grandfather who was a kamikaze pilot. It’s a deeply moving film that will have you thinking about the real cost of war

Golden Chicken and Golden Chickensss- Hysterically funny comedies about the worlds oldest profession. The cameos are a scream.

Miss Zombie-Wonderful rethink of the rapidly becoming dull zombie genre. Its not really a horror film-so don’t expect blood and guts. One of my best of 2014.

R-100- no one under 100 will be admitted. Wild over the top comedy about a man and the women who hunt him down

Rigor Mortis and Mr Vampire- The film that changed Hong Kong horror and the recent film it inspired paired together. Even if the movies weren’t as good as they are the intros alone will no doubt be worth the price of admission

Why Don't You Go Play in Hell? A film about the passion of filmmaking from the master of crafting celluloid transgressions against common decency,Sono Sion's latest puts an auteur director on part with a Yakuza don as they stage an epic bloodbath fueled by ambitions rampant (Mondocurry)

Fuku-Chan of Fukufuku Flats- is a wonderful portrait of outsiders getting by. I can relate to these guys and gals. Perhaps the festival's greatest hidden gem

If you have any interest in Firestorm 3D see it at NYAFF where you'll see it 3D. Its all about the action and it will look great in 3D (and less so in 2D)

White Storm swings between best of the fest  and WTF. Its wonderfully all over the place and everything an action movie can be - lierally

While the concept of Great Passage may sound dull, it follows the life several people as they make a dictionary, the film is in fact a fantastic story of great people who blossom and change over the course of their project. It’s funny and moving and very romantic . Its really clear why the film won a boat load of awards. One of the best of both Japan Cuts and NYAFF

Top Star -A punchy pop confection, as slick and full of bombast as the entertainment industry that it indicts, this cautionary tale warns of the danger of becoming a real life fame monster. (Mondocurry)

May We Chat - Bound to alienate, with its constant bombardment of communications via the latest mobile social media apps, this teen centered drama eventually delves deep to uncover unshakable, disturbing aspects of urban teen life. While occasional yearnings for the comfort of nostalgia appear, they are in short supply amidst modern day harsh realities (Mondocurry)

For details on the other 50 films and tickets go to the festival website.
Posted by Steve Kopian at June 22, 2014