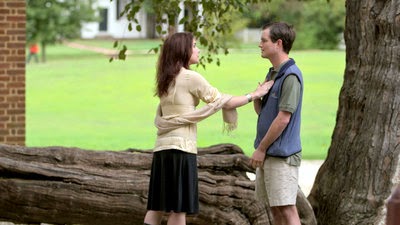 I'm really mixed about this film, its one of the few films I saw at the pre-screenings I really wished I had missed. At the same time the film has some touching moments. This portrait of four adults with autism and their relationship with romance really should have been three separate films, or at the very least not called AUTISM IN LOVE because the sections and the title don't completely work.

The one section that works is the one focused on Lindsey and David. A couple where both partners suffer from the disease. They struggle to get through their days and hold on to their relationship. This is the one section that really focuses on the notion of love. Together for 8 years the pair tries to figure out if they want to take the next step and get married. Its lovely and charming and so good that you wish we had more time with them. I wanted more details about their lives and thoughts.

The second section concerns Stephen who has been married for almost 20 years. We watch as he tries come to terms with the fact that his wife is dying of ovarian cancer. A deeply moving story we are short changed in many ways since we're with Stephen a good while before we are even told he's married. Additionally several events transpire off screen leaving us feeling not as connected to Stephen and his plight as we should.

Lastly is the story of Lenny,  a 25ish year old young man who has very particular ideas about romance. Still living at home with his parents Lenny wants a girl who will let him be the bread winner and let him be in charge. He's had one girlfriend in his life, but that relationship went sour. Actually there is much that is sour about Lenny who seems to simply vent to the camera and have a break down about the course of his life. Occasionally a scary individual Lenny doesn't belong in this film but in a different one.

The biggest problem with the film is that all of the sections really could use more information. So little is told to us and so much time passes between the periods where the filmmakers check in with these people that I'm left to ponder  how much was actually shot for each story since in the cases of Lenny and Stephen we're simply not seeing long periods of time. (And it's not a question of the film's running time being too long, it only runs around 75 minutes)

I was disappointed in this film a great deal since it's one of the few films I had seen up to that point where I felt like I wasted my time sitting in the theater. Not a bad film but one severely lacking in material.

( ADDENDUM: Nate Hood, a young man with Autism I met at Tribeca LOVED the film and explained in great detail to me why its a great film. Here is his review at Screen Comment)
Posted by Steve Kopian at May 03, 2015