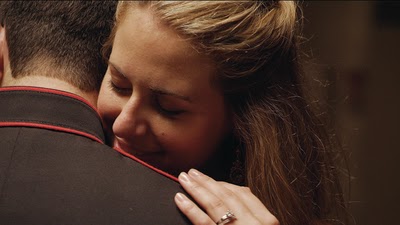 Because of the crush of late in the game Tribeca reviews BIRTHDAY a dazzling little short film didn’t quite get the attention it deserved when I first reviewed it earlier today (in a post written a week ago) . Thankfully because we at Unseen are allowed do over and retakes I’m going to expand my thoughts on the film.

The film concerns what happens when a soldier on patrol in an unnamed country is injured by an anti-personnel weapon. Wounded to the point that he loses one arm and both legs the soldier is sent to a hospital stateside. The film charts the struggle to overcome the injuries and go home and lead a reasonably normal life. The film shows the struggle both from the point of view not only of the soldier but his wife and family who are shown to have trials of their own.

This inspiring film needs to be shown to anyone in the military or contemplating joining up. While the injuries may scare off some people who will mistakenly think their time is going to be a walk in the park, the film will do infinitely more good since the film clearly shows that just because one is injured life doesn’t go on. The men and women who are wounded can, if they are willing, have normal lives. It’s a message that has to be stated and restated. Of course it won’t be easy, but it is possible.

The film scored several points in my book because the film shows clearly that the injury of the soldier is not a picnic for his wife and family. She is wracked with her own pain. I love that the film shows that it’s okay to feel overwhelmed by the situation.

If the film has any flaw it’s that it could be considered a bit to "up". The success of our hero is tied very much to a good home life and a spouse who is willing to accept the injury. Not all families are going to be as loving and strong. Of course it’s a nitpick on my part. I'm fully aware that the problem is due to the film brief running time- its too short for us to fully see the darkness and down days.  (perhaps a feature film could be done?)

As it stands this is vital and important film, and as I said earlier it needs to be shown to everyone in the military. It’s a celebration of the human spirit and a glorious expression that life does go on and that there is no reason not to join in.
Posted by Steve Kopian at May 02, 2015