The Museum of Modern Art is doing a series of films concerning the early days of sound in Japan- a transition that took the better part of a decade to complete. I spent Sunday afternoon at the museum with Joe Bendel watching some early sound samurai films. 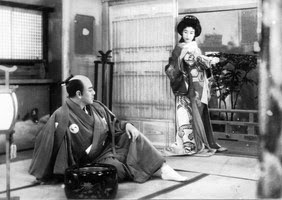 CHUSHINGURA (1932)
The only surviving print of the first sound version of the 47 Ronin is extremely rough and occasionally choppy. The sound track is full of white noise and the image is scratched. Its not so much like watching a film as watching a dream on a big screen. Watching it there are times where I wasn't sure if I was awake or asleep. The running time lists as 139 minutes but it's clear this should have been much longer.

To be honest and fair I can't critique the film because the version it exists in is so rough. I can't be sure that things aren't explained because they never were or because sequences are are missing ( a distinct possibility since some scenes are so choppy). To be honest that had I been at home watching it I probably would have reached for the fast forward or bailed on it- which would have been a mistake since the end of the film is quite moving.

The battle sequence when the samurai take their revenge is a glorious one that plays out like the real chaos of war. Things aren't neat, innocent bystanders are hurt and its every man for himself. Its a brilliant piece of film making. Actually the whole look of the film is amazing and it's easy to understand why the film was a big to do in its day. The final sequence when the soldiers parade from their victory to their deaths (what the did while applauded was a punishable by death) is moving. The moment when one of the samurai gives the girl he loves the tag with his real name (something she had been trying to get) and date of death had me misting up, as did the father who thought his son was a coward only to find out he was a hero.

The film is a must see for anyone who loves the story or Japanese cinema or cinema in general- however if you don't know the story of the 47 Ronin you may want to familiarize yourself with it since the film's, as I said, a tad choppy.

(Apropos of nothing-The subtitles appear to be wrong at one point when one character is revealed to be 16 at the start, 22 at the end and the passage of time is said to be 10 years.)


KAKITA AKANISHI aka THE LETTER (1936)
Odd ball samurai comedy(?) about a spy in a Lord's court who hooks up with another spy to find out about a plot to over throw his own lord who is still a child.

Tonally one of the weirdest films you'll ever see the film opens with a long running gag involving a meowing cat that shifts to a spy satire, has a bit of survived hari kari (don't ask), has a shift into a battle sequence before ending as a romance. WTF doesn't begin to describe it.

I like the film but to be honest I'm not sure what I really think about it. Its just so all over the place. There is humor but it's not laugh out loud funny. There is a seriousness but it's occasionally undercut by a stray joke. There is this fantastic fight scene that seems to have been brought in from another film. And then there is this romance which is the start of another whole thing.

Both films play tomorrow at MoMA and if you have any interest you must go since it's unknown when you'll ever have a chance to see them again-certainly on a big screen like this.
Posted by Steve Kopian at May 11, 2015