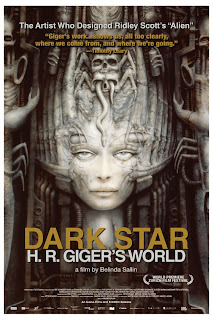 On the surface, it seems like surrealist artist and set designer H.R. Giger would make a fascinating subject of a documentary. His often unsettling work has inspired and terrified millions, most notably in Alien, and his dark aesthetic has generated its own mythos. Who wouldn't want to glimpse into this world?

But despite its title, in Belinda Sallin's documentary, Dark Star: H.R. Giger's World, we don't actually explore the artist's world all that much.

We do, however, spend a lot of time exploring his yard.

A nightmarish sculpture garden featuring Giger's surreal and often horrifying work, including a fountain and a one-person train that travels through the yard, the images are striking. The lush greenery provides an amazing contrast to the frightening precision of Giger's art. But that the garden is overgrown and the sculptures have clearly seen better days make the whole scene a little sad.

In fact, the whole documentary feels a little sad. Filmed in the last year of Giger's life, the artist spends most of his screen time in black pajamas, shuffling from one room to another. While he opens up a bit and there's a few shots of him sketching, he's mostly seen watching TV or petting his cat.

Instead, most of the talking is done by an odd collection of superfans that someone came into Giger's orbit, including psychiatrist Stanislav Grof, who wrote a book about Giger; metal musician Tom Gabriel Fischer (formerly of the band Celtic Frost) who works as Giger's assistant; and current wife, Carmen Marie Giger. They go on and on about Giger's deep connection to the darkness, his ability to convey the trauma of birth, his ability to combine the organic with the mechanical and ... and ... and ... these people certainly can talk a lot about Giger without really saying anything of depth. (Giger, himself, when asked about his work tends to shrug it off with a "I just paint what I like.")

Old images and archival footage from Giger's younger days (including on the set of Alien) do bring a spark of interest to the film, but are presented without much context. Interviews with two of his former partners do reveal a certain depth and a warmer side of Giger, but there's little of that.

Maybe most egregiously, his pivotal relationship with Li Tobler, who was the model for several of his paintings, and her subsequent suicide, is somewhat glossed over as "Oh yeah, that was pretty hard" so we can return to more superfans and shots of Giger's mother-in-law complaining about 20th Century Fox and Fischer stapling papers together.

Even moments that should be emotional -- a signing at a gallery where teary-eyed fans show off their tattoos and just seemed honored to meet him -- are shot from a distance. The filmmakers didn't talk to any of these fans and we never get to find out what is going on in their heads. Instead, we get the gallery's curator talking more about darkness and the future and more related nonsense.

Sadly, Giger died just a few days after filming of Dark Star was completed, so this is likely going to be the final record (at least from him). If you're a fan of Giger's work, you'll at least get to see a lot of it. If you want to hear people sit around and say the deep things you said to each other in college, you'll get to hear that. If you want to understand who H.R. Giger was, this documentary won't do it.