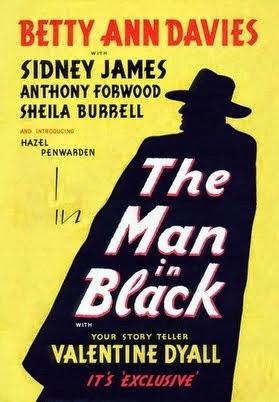 Based on a John Dickson Carr story and also the Appointment with Fear radio series THE MAN IN BLACK is an early Hammer film that is notable for having Sidney James, best know n in many circles as a member of the Carry On crew in a dramatic lead.

The plot of the film has rich yoga expert Henry Clavering dying during yoga demonstrations. His second wife and her daughter then try to drive Clavering's daughter insane so  that they can inherit the full fortune.

Playing like a dynamite half hour program stretched to 75 minute THE MAN IN BLACK is a mixed bag. It has mood, it has great performances, it has some of the most vile screen villianesses of all time,  but it also goes on way too long. I can't even imagine an audience back in 1949 not checking their watches during the film's second half.

Don't get me wrong I like the film, but I would have loved this had it been cut down by say 15 or 20 minutes.

WHy am I writing this up- three reasons.

First, as I said Sid James plays it straight. It a joy to see what he could do with a dramatic piece.

Second it's an early Hammer film. Most people I know love Hammer films, but very few know their earlier films, certainly nothing from the 40's.

Lastly Betty Ann Davies and Sheila Burrell as the mother and daughter bitch goddesses from hell must be seen to be believed. Why anyone would deal with them, nay why any man would marry them is beyond me. They are as evil and vile as they come. Their nastiness has to be seen so that they can join the ranks of the truly great villains of all time.

Available from Sinister Cinema.
Posted by Steve Kopian at May 14, 2015