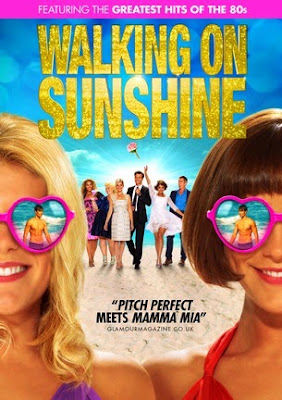 Taylor has a perfect summer romance in Italy and finds the guy of her dreams. Only she walks away. Another summer and she returns to Italy for her sisters wedding- only to discover her sister fiance is her old summer love.

Musical romantic comedy set to some of the poppiest hits of the 1980's is sweet, charming, well acted, displays some killer musical numbers and has charm to burn. If you can take it on it's own terms this film will make you smile and bounce you around the room.

And as you can see that's a big but, the film is so by the numbers and so close in feel to MAMA MIA that there are zero surprises and you can write it in your head from start to finish almost the instant that the film starts.  Its not fatal to the film, but it takes what should have been an out of the park home run of a juke box musical and makes it a respectable double (maybe triple). And the problem isn't the plot, its the set up- why did it have to be set in a beach community that looks similar to the Island in MAMA MIA? Okay- they could have gotten away with it had they not had three women at the center of the film (and the lost love plot). Its too close to other things not to stand on its own.

Understand that I'm picking on it because this should have been freaking great not very good.

On the other hand if you can take this on it's own terms this is neat little film. As I said the performances are wonderful and the musical numbers are spectacular. They really went to town with them and they really lift things up to such a degree you'll find yourself smiling despite knowing you really shouldn't..

For me the film works best in some of the smaller numbers. For example It Must Have Been Love is heartbreaking. I also liked that not all of the women are fashion models, some of them actually have body types that are more normal.

I like this film a great deal. Its one I can easily recommend with the caveat that you have seen it before, perhaps not better, but still...

The film hits VOD (iTunes, Xbox, GooglePlay, Amazon InstantDirecTV, Comcast, Cox, Dish, Verizon) on Friday and is perfect for a night when you want to feel good but don't want to think.