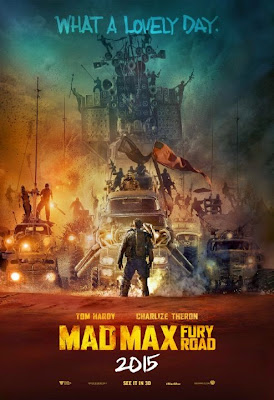 1. One of the Best Films of 2015. I've seen several hundred films so far this year and this is one of the ones that leaps to the top of the pile.

2. This is one of the greatest action films ever made. This film just starts and goes. It pauses for a bit here and there so you can breath, and there is just enough in the way of characters and character arcs that you care about the people and worry about them when things happen (characters die and get torn up). Additionally most of the film was done without computer enhancement. This wasn't done in computers like a realistic cartoon, the things that happen involve real people and objects with real weight.

3. This is one of the greatest films I've ever seen. Put it with 7 SAMURAI, WAR AND PEACE, BIRTH OF  A NATION, RED CLIFF, BURMESE HARP, LORD OF THE RINGS, and a couple of others. Its a visceral game changer that forces you stand up and take notice. While I could argue that all it does is amp up MAD MAX 2 ROAD WARRIOR with more, it's that MORE that raises the bar and elevates the film. There is a real world in this film. There is a sense of more at stake than just a tanker of  gas and handful of survivors. There is a weight to everything, including a greater cost if they lose
----
This film is George Miller's Masterpiece film and the one's that came before it merely the doodles that led to this.

That said the film has it's flaws.

The pacing of the slower sequences seem too slow, especially toward the end. This is of course due to the fact that the film gear shifting from 290 mph to 35 is jarring. After the first break which is expertly handled, the later ones don't quite work as well.

The film also kind of  could be knocked-slightly- for just starting and going. We know very little which is fine, but much of the dialog is obliterated by engines and crashing machinery. We don't need to know much of that but at the same time it would have been nice to have it as shading.

There are also one or two minor things, but they aren't really worth mentioning them.
---- The plot of the film has the long wandering Max being captured and dragged off to a tyrannically run settlement. Max is important because he is a universal donor so his blood and organs are important. When the lord's wives are carried off by a character played by Charlize Theron, Max is taken along as a living blood bag. Soon everyone is giving chase and Max is fighting to get and then remain free. Its a two hour chase and it's amazing.

What I find interesting is that the film is probably the most reduced down that you can get and still really care about the characters. Certainly plot wise you can't get much simpler and sustain 120 minutes of pure motion.

This is what the movies have been shooting for for the last century plus. This is cinema in it's purest form. I would love to go back and show this film to say Georges Melies or Douglas Fairbanks or Yakima Canutt  any one else who made "Oh WOW" movie magic in the first fifty years of cinema and see what their reaction would be. I so want to show them this and tell them you're dreams made this possible. I'm sure it would rock them to their core because they haven't been prepared for it, but at  the same time I want to blow their minds.
----
There has been a great deal of talk the films deeper meanings and agenda. People  talk about whether the film is feminist or not. There has been talk about the film's politics or its social message and view. And I'm sure that all of that is in there but at the same time does it matter?

I'm not being a snob here, I'm simply asking why are these people focusing on such a small part of this huge machine? Why are people pulling the film apart when no one has time to even figure out what the hell this thing is as a complete film?

For some people whether the film is feminist or not will determine if the film is good or not. Likewise it's politics. The film has been out for ten days as I write this and I how the hell can you really argue your point when I doubt you've seen it have seen it more than once. How the hell did you get past the spectacle to even consider the deeper meanings of anything? I'm not even going to try and consider pulling the thing apart until five or six more viewings. I have to finish taking in the pretty pictures before I look under the paint and see how it's been made.

I have no doubt that I'll way in on the feminism and the politics, but for me it doesn't matter if the film matches my agenda, it just entertains the hell out of me which is all I care about.
----
While you could probably argue the film doesn't invent the wheel, I mean Miller doodled this with ROAD WARRIOR, but what he does with the wheel, how he dresses it up and puts it to use is as glorious a thing as you're likely to see until the next genius comes along and tries to top this.

Go see this film on the big screen while you can